A second, massive volley of rockets was aimed at central Israel from the Gaza Strip just after 9pm Friday evening, even as IDF ground grounds operated in the Gaza Strip in a bid to stem the attacks. At least two rockets were reportedly intercepted in the Tel Aviv area.

A woman was lightly hurt by glass and a house was badly damaged in Gan Yavne, near Ashdod,  when a rocket struck between the house and a kindergarten. Elsewhere, three people were treated for shock in Ashdod, Kiryat Ono and Ramat Gan.

In the afternoon Friday, rockets continued to hit a number of southern communities such as Be'er Sheva, Ofakim and Eshkol, after the morning hours saw a number of salvos fired at Israel. 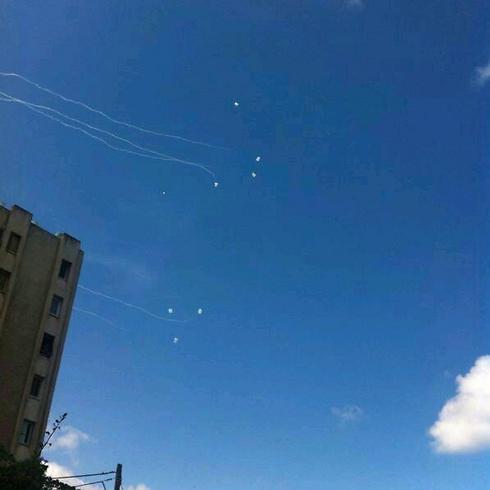 Iron Dome shot down a rocket over the city of Netivot at about 5pm and another at approximately 5:25pm.

At around 2:30 pm, Iron Dome intercepted a number of rockets fired at the Be'er Sheva region, with one falling in an open area; another rocket fell in Sdot Negev Regional Council and later near Sderot.

At around 1:40 pm a rockets hit the Eshkol Regional Council, and again at 1 pm, minutes after Iron Dome intercepted another rocket fired at the Merhavim Regional Council, both in southern Israel. A rocket also hit the southern community of Ofakim.

At around 10 am, at least seven rockets fired at the coastal city of Ashdod were intercepted by the Iron Dome missile defense system.

At around 9 am a rocket exploded near a Hof Ashkelon community and at 8 am, sirens roared in Dimona, home to Israel's nuclear reactor, Be'er Sheva, Arad, Yeruham and other Negev communities. Some three rockets fell in open area in the community of Gan Yavne and Ashdod. Before that, at roughly 7:30 am, two rockets fell in the Eshkol Regional Council, with one going off within a community in the regional council. Roughly an hour before hand, a rocket exploded in an open area, but failed to cause damage. 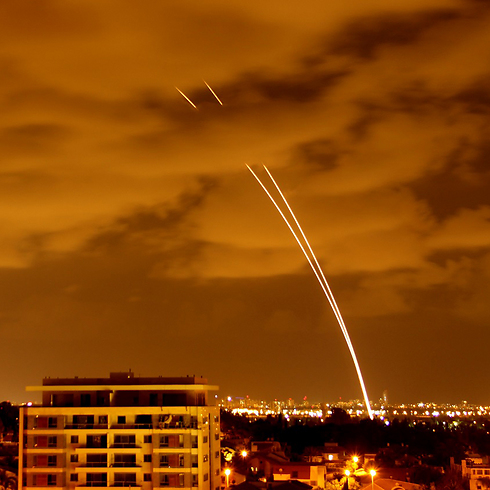 Iron Dome intercepts rocket over Tel Aviv (Photo: Pinni Neteravich)
Rockets continued to fall on Israel on Thursday both before and even after an agreed five-hour UN brokered humanitarian pause in fighting began at 10 am, with over 100 rockets fired since the humanitarian halt in fire ended and before the beginning of the IDF's ground operation in the strip 12 hours later at 10 pm.

A heavy barrage of rockets from the Gaza Strip was fired at southern and central Israel. The Iron Dome intercepted one rocket over the Tel Aviv metropolitan area, and five over Kiryat Gat.

Magen David Adom paramedics treated one person lightly injured when he tripped while running for shelter in Holon, and two people were treated for shock in Rishon LeZion and Kiryat Gat.

Shrapnel was found at the entrance to a gas station in the Shfela area. In Netivot, a disaster was prevent when a house that suffered a direct hit was empty. Another rocket exploded inside the city. A rocket also fell in Sdot Negev. No one was hurt in any of these attacks.

Heavy barrages were fired at the Shfela area, as well as at Ashdod and Ashkelon. The Iron Dome intercepted 12 rockets, and another one fell in an open area, causing a fire. A soldier was lightly wounded in Hof Ashkelon from rocket shrapnel in his leg.