German FM Steinmeier says decision to declare 400 hectares of land in Gva'ot 'state land' would 'send the wrong signal at the wrong time'; EU stressed it won't recognize any changes made to the 1967 borders.

The chorus of condemnation of Israel's plans to declare 400 hectares of land in the West Bank "state land" continued on Tuesday, with the United States and the European Union repeating their calls on Israel to reverse its decision.

The EU stressed it won't recognize "any changes to the pre-1967 borders, including with regard to Jerusalem, other than those agreed by the parties," said Michael Mann, spokesman for EU High Representative Catherine Ashton, in a statement.

"At this delicate moment, any action that might undermine stability and the prospect of constructive negotiations following the ceasefire in Gaza should be avoided," the statement went on to say.

Both Germany and the US said the move would send the wrong message to the Palestinians, and would harm attempts to reach a two-state solution to the Israeli-Palestinian conflict.

"We are deeply concerned about the declaration of a large area as 'state land' to be used for expanded settlement building," State Department Spokeswoman Jen Psaki said on Tuesday, in a statement similiar to one issued by the State Department on Sunday. "We have long made clear our opposition to continued settlement activity. We call on the Government of Israel to reverse this decision."

Psaki also expressed concern "by reports that new settlement and East Jerusalem construction or planning announcements may be issued at any time, including for the sensitive area of Giv'at Hamatos in East Jerusalem."

"These steps are contrary to Israel's stated goal of negotiating a permanent status agreement with the Palestinians, and it would send a very troubling message if they proceed," Psaki's statement went on to say, urging both sides to avoid unilateral steps that could undermine peace talks.

The statement from the administration of US President Barack Obama, who has been at odds with Netanyahu over settlements since taking office in 2009, was the latest point of contention between Washington and its top Middle East ally Israel, which also differ over Iran nuclear talks. 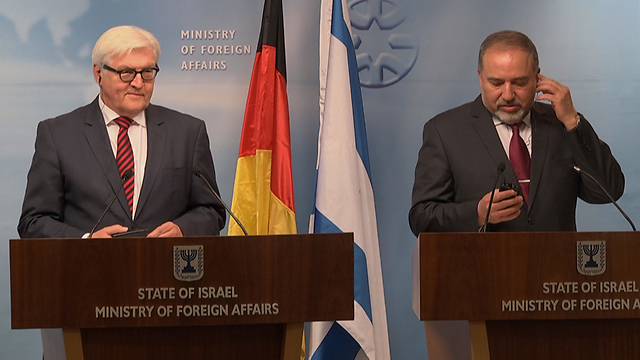 He noted Berlin expects "that the decision by the Israeli military authorities will be revised."

Steinmeier warned it would be "even more difficult to find a way back to peace negotiations" should Israel take such a step, urging both sides to do everything "in order to create trust and refrain from unilateral and provocative actions."

The European Union issued a similar statement of condemnation on Monday, saying that "at this delicate moment, any action that might undermine stability and the prospect of constructive negotiations following the ceasefire in Gaza should be avoided."

Some 400 hectares (988 acres) in the Gush Etzion settlement bloc near Bethlehem were declared "state land, on the instructions of the political echelon" by the military-run Civil Administration on Sunday.

The notice published on Sunday by the Israeli military gave no reason for the land appropriation decision, while Israeli media reported the move was in response to the kidnapping and murder of the three Israeli teens. Tensions stoked by the kidnapping quickly spread to Israel's border with Gaza, which is controlled by Hamas, and the two sides engaged in a seven-week war that ended on Tuesday with an Egyptian-brokered ceasefire.

US-brokered peace talks broke off in April after Abbas reached a reconciliation deal with Hamas, the Islamist terrorist organization that dominates the Gaza Strip, and Israel announced it would not negotiate with a government backed by Hamas.

After the collapse of the talks, US officials cited settlement construction as one of the main reasons for the breakdown, while also faulting the Palestinians for signing a series of international treaties and conventions.

Israel has said construction at Gva'ot would not constitute the establishment of a new settlement because the site is officially designated a neighborhood of an existing one, Alon Shvut, several km (miles) down the road.

Some 500,000 Israelis live among 2.4 million Palestinians in the West Bank and East Jerusalem, territory that the Jewish state captured in the 1967 Six Day War.