Qaeda-rebels: UN Peacekeepers to be judged according to God

Syrian rebels holding at least 45 Fijian UN peacekeepers say they could try the forces 'according to God's criteria' as air raids in Syria killed at least 18 Islamic State fighters.

According to the NGO, the peacekeepers could be tried "according to God's laws."

The forces were captured last Thursday and last week the terror group demanded compensation from the UN for the death of three of its members which they claimed died in a fire exchange with UN forces. 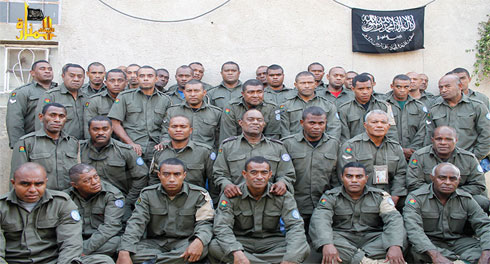 45 Fijian forces held hostage
In a separate report, it was claimed the rebels demanded aid be sent to a Damscus suburb and that Nusra be removed from the UN's terror group list in exchange for the peacekeepers.
Nusra flag on border with Israel
X

Nusra flag on border with Israel

Philippine officials said Filipino forces would remain in Golan until their mission ends in October, adding they would not be withdrawn prematurely following the rebel attacks and the capture of the Fijian peacekeepers.

Meanwhile, in Syria some have begun to blame Israel. Official Syrian officials spoke to Hezbollah's Al Ahkbar newspaper, and said "Israel had the option of preventing the kidnapping of the Fijian soldiers, but it doesn't want these forces in the Golan after the European's leave."

According to the Syrian official "as of now the negotiations for their release has yet to yield results, but it is clear that if there were European soldier then the world would be going crazy." 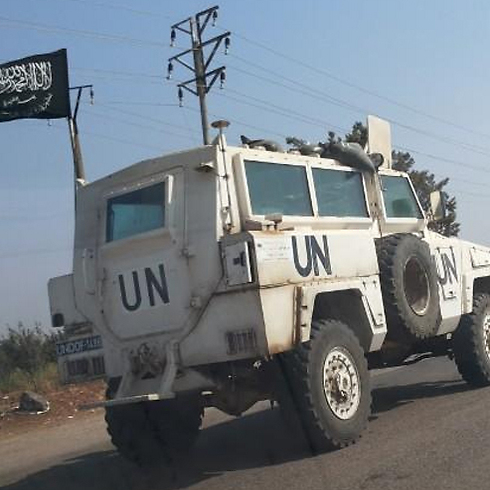 UN car with Nusra flag
Syrian government officials said that Nusra Front rebels are using UN vehicles and uniforms to move around the Golan area as they battle the regime for control over the Qunetira Crossing into Israel. "The Syrian army hit a car-bomb which was in fact a UN car rebels were using," the official was quoted as saying. 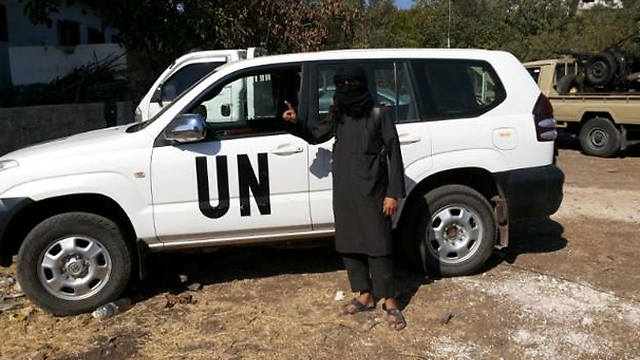 Meanwhile, eighteen foreign fighters from the Islamic State, including an American jihadist, were killed in a Syrian air raid on a town near the militant group's main stronghold city of Raqqa in eastern Syria, a human rights monitoring group said on Thursday.

The Syrian Observatory for Human Rights, which has tracked violence on all sides of the three-year-old conflict, said reliable sources reported that top Islamic State leaders who happened to be in the municipal building of Gharbiya at the time of the raid were among the foreign fighters killed.

The building had been used as a headquarters of the hardline group, according to the monitoring body.

Another air raid on Thursday that hit a former intelligence headquarters in the city of Abu Kamal near the border with Iraq that was used by the Islamic State also killed an undisclosed number of their members, the monitoring group said.

It said the Syrian raids allowed 13 detainees held by the IS fighters to escape during the chaos.

Proclaiming a 'caliphate' straddling parts of Iraq and Syria, Islamic State has swept across northern Iraq in recent weeks, prompting the first U.S. air strikes in Iraq since the withdrawal of American troops in 2011.

The insurgents are also tightening their grip in Syria, of which they now control roughly a third, mostly rural areas in the north and east.

Another opposition source in Raqaa said that two raids on southern and northern parts of the city of Raqqa on Thursday caused several civilian deaths and injuries.

The Syrian army has intensified aerial bombardment of rebel held areas in rural north western Syria in recent days including in the countryside of the city of Hama, where rebels have made some inroads and taken over checkpoints and towns, according to activists.

President Bashar al Assad's forces have stepped up an air blitz in the eastern suburbs of Damascus to recapture areas that have been in the hands of rebels for over a year, causing dozens of mainly civilian deaths, according to activists.

Rebels who claim to have repelled army attacks and killed dozens of army forces have endured ongoing ground shelling by government missile batteries located in Damascus' city centre. The shelling and heavy aerial bombardment have razed large residential areas to the ground in what activists say is a scorched earth policy.

Although the authorities have made gains in areas around the capital this summer, including the town of Mleiha just outside Damascus on August 14, rebels say they have succeeded in repelling further advances.

They say even the areas that fall to the army continue to witness ongoing clashes and mortar attacks by rebels positioned in neighboring districts.

Although insurgents have been prevented from taking central Damascus, President Bashar al-Assad's forces are worried they will reach it by digging tunnels from the sprawling suburbs and outlying towns under their control.

Islamist fighters battling the Syrian army, who last week overran a UN-controlled crossing point on the "disengagement line" that separates Israelis from Syrians on the Golan Heights, said they had taken over strategic hills that could help them open new supply lines to tracts in southern Syria held by rebels.

The Syrian army has denied allegations of new rebel advances.

Reuters contribute to this report