'Not all mysterious blasts at Iran's nuclear sites and missile bases were result of sabotage'
Photo: AP

Analysis: If Sunday's blast was the result of sabotage, it means someone got tired of waiting for Iran to reveal to the UN what is really going on at the 'military complex.'

Not all the mysterious explosions which have occurred in Iran's nuclear sites and missile bases in the past eight years were the result of intentional sabotage by foreign intelligence agencies.

"The Iranians are doing a pretty good job in sabotaging the project themselves," former Mossad chief Meir Dagan once said. "They have a sort of 'trust me' culture and carelessness there, which quite often lead to accidents."

But if someone did succeed in infiltrating the Parchin site with explosives and causing the huge explosion which took place there, we are talking about an exceptional achievement.

The Iranian Students News Agency (ISNA) reported that the explosion, which took place Sunday evening at the explosive materials production unit near Parchin, left at least two of the unit's workers dead. The Iranian opposition website reported that it was a very strong explosion: The blast shattered windows in buildings located about 15 kilometers (9.5 miles) from Parchin, and the flash was seen from a distance.

According to suspicions, Parchin hosts the activity of the "weapon group," whose existence has been denied by Iran. This group is responsible for the heart of the nuclear program – developing the warhead of the Iranian nuclear bomb. 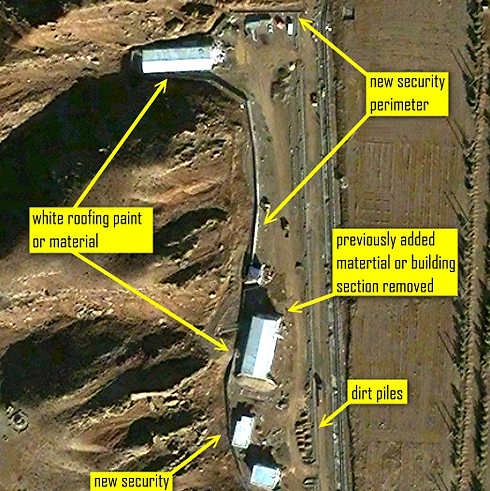 Satellite imagery of Parchin military facility from 2012 (Photo: ISIS website)
The International Atomic Energy Agency (IAEA) has demanded many times that Iran let its inspectors enter the site – but the Iranians have firmly refused. They admit it is a secret military base, but claim there is no nuclear activity going on there. Officials at the IAEA, which relies on intelligence information from Western and Israeli sources, are convinced that the Iranians are lying. Satellite images have shown that since the UN inspectors demanded to visit the site, the Iranians have been busy concealing evidence: Intensive demolition and cover-up work has taken place in Parchin's experiment and development field. In 2012, satellites documented new structures and huge bulldozers, as well as a tall concrete wall replacing the fence which encircled the site. The satellite documented many piles of dirt and building sections which point to extensive construction work taking place under the new roofs. The Iranians claim that the nuclear development is for peaceful purposes only. Israel and the United States believe Iran is lying and that the open progress made in the nuclear program is aimed at disguising its secret and hidden part, the one which will turn the nuclear products – which are supposed to be used for peaceful purposes – into an atom bomb. Western officials suspect that at the heart of this secret development is the weapon group developing the nuclear lens mechanism. It's a complex system of timers and explosives assembled around the core of the bomb, which explode in a way that "pushes" the enriched uranium sphere inwards and starts the chain reaction needed for an atomic explosion. If the "smoking gun" for the existence of the weapon group is found, it will serve as decisive evidence that Iran has been lying and that there is no point in negotiating with it. Iran's refusal to open Parchin to international inspection and present the activity taking place at the site only increases the suspicions against the Islamic Republic. The softening relations between Iran and the West raised fears in Israel that the world powers would waive their demand that Iran must expose all its atom secrets. It's possible that someone was tired of waiting for the Iranians to provide the answers and decided to do something and hit the heart of the weapon group. If Sunday's explosion was the result of intentional sabotage, it wouldn't be the first time this happened. Since 2005, there have been reports of a series of mysterious blasts at the nuclear sites in Natanz, Isfahan and Qom. The Iranians have accused the Israeli and Western intelligence services of infiltrating their purchase system in Europe and South America and sabotaging equipment sent to Iran. According to foreign reports, Israel and the United States even managed to get destructive viruses, such as the Stuxnet computer worm, into the Iranian nuclear program's computers, causing great damage. In addition, some of Iran's important nuclear scientists and senior Revolutionary Guards officials who were involved in securing the facilities have been killed in recent years. Some died in mysterious accidents, while others fell victim to unknown assassins.