Fall of town in Anbar province is seen as a step by Islamic State to isolating the pro-government forces defending the Haditha dam, which controls the flow of the Euphrates to southern Iraq.

BAGHDAD – Islamic State fighters overran a military base that the Iraqi army had abandoned about eight kilometers west of the town of Hit in the Anbar province earlier on Monday, according to an army officer and three members of a government-backed Sunni militia.

Up to 180,000 people have been displaced by fighting in and around Hit since the city fell to Islamic State militants earlier this month, the United Nations said on Monday.

The jihadists looted three armored vehicles and at least five tanks and then set the camp ablaze, the officer and Sunni militia fighters said. 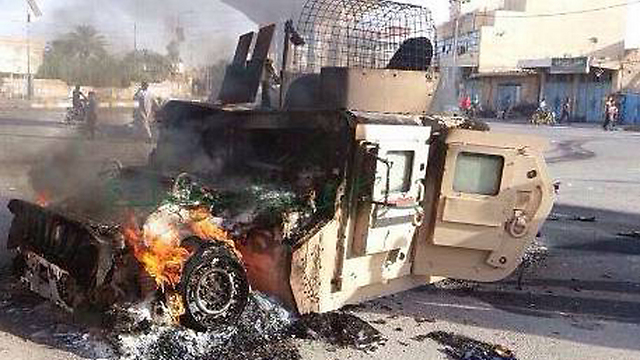 Islamic State has been on the offensive in the desert province of Anbar, bordering Syria, in recent weeks, taking the town of Hit on October 2 and nearby Kubaisa on October 4.

As a result of the fighting and air strikes, carried out by the Iraqi government and US-led military coalition, up to 30,000 families or 180,000 individuals have fled Hit, which lies 20 kilometres west of Ramadi, the UN's Office for the Coordination of Humanitarian Affairs (OHCA) said in a statement.

It said people fled east towards war-torn Ramadi and Khalidiya. Islamic State controls from Qaim, which borders Syria, east along the Euphrates River until the Haditha dam, where tribes and security forces are battling the jihadists.

The fall of Hit is seen as a step by Islamic State to isolating the pro-government forces defending the Haditha dam, which controls the flow of the Euphrates to southern Iraq.

Before Hit fell to Islamic State, the town had been a relative oasis for families who had been displaced from their homes in Anbar province since the beginning of the year. About 100,000 displaced people had been living in Hit, the UN said.

In late December, then Prime Minister Nuri al-Maliki had ordered troops to arrest a Sunni lawmaker and clear an anti-government protest camp in Anbar's capital Ramadi.

The government offensive sparked a tribal revolt, which the Islamic State took advantage of to enter both Ramadi and its sister city Falluja.

The ensuing war from January until the fall of Mosul in early June left more than 430,000 Anbar residents displaced, and allowed Islamic State to take over Falluja and carve out strongholds in Ramadi.

The war in Anbar and its conquest of Mosul have allowed Islamic State to expand its reach from eastern Syria across Sunni parts of Iraq with the goal of establishing a caliphate.