'Contempt towards the police and towards the law, on both sides of the Green Line'
Photo: AFP

Analysis: Palestinian and Israeli Arab incitement, loss of fear, feelings of deprivation and admiration for the Islamic State are the engines of violence leading us to a third intifada.

It's the soundtrack we don't want to remember from the days of the intifada: You have yet to digest the first terror attack of the morning and you're already caught up in the next attack, and the heart misses another beat because you know that within an hour or two, another attack will be carried out.

Third Intifada
The terror attacks Israel cannot thwart
Yossi Yehoshua
Analysis: Lone terrorists pose an impossible challenge for the IDF and Shin Bet. There is no real security solution to this new-old type of terrorism apart from calming the situation down, on both sides – and that's the government's responsibility.
The terror attacks Israel cannot thwart

If this insanity isn't stopped now, we will find ourselves in those dark days of the second intifada.

And in the meantime, between one attack and another, there is endless chatter: A flamboyant police commissioner who talks like a commentator about the need for security, and an internal security minister who keeps babbling about "teaching them a lesson."

And at the top of the pyramid stands Prime Minister Benjamin Netanyahu, who has no idea what to do. So as always, he releases a national blaze into the air aimed at shirking responsibility and heating up the different sectors.

It seems that the state and its security forces are losing control of the situation.

The people on the ground are unimpressed by the threats and by the police's boosted alert level. There appears to be no fear of the government, on both sides of the Green Line. A young Israeli Arab threatens policemen with a knife, and the entire Arab street rages when he is shot.

The policemen's conduct should be looked into and they should be punished if necessary. But the fact that the young man was not afraid to attack policemen points to the atmosphere: It's okay to show contempt towards the police and the law. The terrorist from Nablus, who murdered a soldier in the heart of Tel Aviv on Monday, did it while the police were on a heightened state of alert. 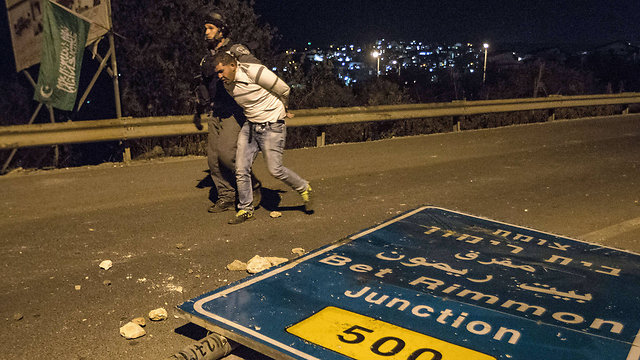 Kafr Kanna, Monday. 'The feelings of deprivation cannot be solved at once, but the fear of the government can and must be restored quickly, and forcibly' (Photo: AFP)

We are in the process of shifting from sporadic terror accompanied by popular riots to popular terror spilling all over. The next stage, which is waiting right around the corner, is terrorism using firearms.

And all this is happening on both sides of the melting Green Line, which is connecting the Palestinian terror in the West Bank with the Israeli Arabs' riots. We are no longer talking about stones in Wadi Ara or burning tires. We have already gotten used to that, unfortunately. On Sunday, Israeli Arabs in Tayibe tried to lynch an innocent civilian just two minutes away from the city of Kfar Saba. Like in the previous intifada, we are accepting these incidents as a predestination.

There are three motors leading the engine of violence. The first is that there is no fear of the government anymore. The second is the unrestrained incitement of the Israeli Arab and Palestinian leadership. Above all, stands this youth's admiration for the Islamic State organization. The slaughtering knife used the past two days was taken directly from there.

The third motor has to do with the Arab's place in the Israeli society: Their feelings of deprivation – whether justified or not – feed the growing hostility behind the violent outbursts. Israel has a part in it thanks to politicians from the extreme right who initiate provocative bills erasing any chance of a future agreement.

The feelings of deprivation cannot be solved at once, but the fear of the government can and must be restored quickly, and forcibly. We must not give up on arresting Arab rioters in Jerusalem and in every corner in Israel – even if it requires building another prison for them.

And those responsible for the attempted lynch in Tayibe should know that they will be caught and sit in prison. We don't have to necessarily target every child who throws a stone, but every person behind the incitement, every person who inflames the violence and uses stones, fireworks and Molotov cocktails.

A "firm hand policy" also means blowing up the houses where the terrorists lived with their families. There is no escape from deterring the Palestinian population in the West Bank which the stabbers and terrorist drivers come out of.

The residents of the area in Nablus which the Tel Aviv murderer came from on Monday should not be getting permits to work in Israel. Terror cannot be handled without punishing the environment, because the place is infected: The terrorist murdered on his own, but he did not come from the moon. He prayed at a certain mosque where he was fed with incitement, and the people in his surroundings should know that their actions carry a collective punishment.

This isn't another police operation. This isn't another concentrated effort. This has to be the Israel Police's project and must involve all its branches, in collaboration with the Shin Bet, from now on until further notice. The goal is to restore the rule of law within the Green Line among sectors which have cut themselves off from the state, and beyond the Green Line, in the places where the murderers grow.

This is all directed at the short run in order to stop the anarchy while it's still in its early stages. But the long-term solution can be found somewhere else: Through discussions, by taking care of the deprivation and through a dialogue between citizens with equal rights.