Minister Peri says discussions at this time on 'Nationality Law,' which seeks to enshrine Israel as Jewish nation-state, are irresponsible due to rising tensions in Arab sector; PM says legislation to undergo changes before becoming law.

Justice Minister Tzipi Livni decided to postpone the vote that was due to take place Sunday at the Ministerial Committee on Legislation on a Basic Law proposal that would solidify Israel as Jewish and democratic nation-state.

The bill, known in Israel as the Nationality Law, seeks to enshrine in law the nation-state of the Jewish people for the first time since Israel's foundation.

Livni decided to accept Minister Ya'akov Peri's request to postpone the vote, who dubbed the bill as "dangerous."

"The explosive situation that exists in the Arab sector at the moment has already led to violent clashes and casualties. A discussion on the 'Nationality Law' at this time is irresponsible," Peri said at the committee meeting.

Livni said there are similar bill proposals, and a joint committee will formulate understandings on the issue in the future.

Earlier, Prime Minister Benjamin Netanyahu said he was pushing forward MK Ze'ev Elkin's (Likud) proposal, noting changes will be made to the proposal before the bill is made into law. 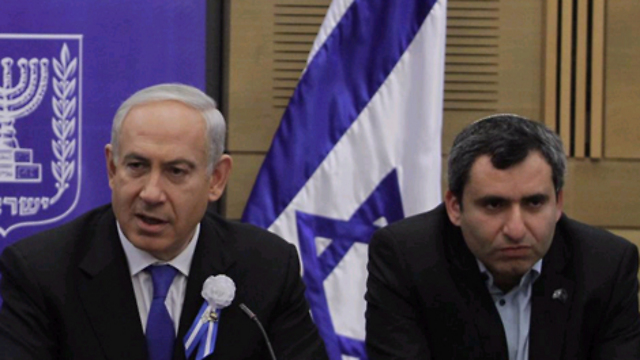 The law, which calls for Hebrew as the national language and gives Arabic "special status," is expected to provoke a storm inside and outside of the coalition, especially among MKs on the left side of the aisle who have lashed out at the proposal.

The controversial legislation, however, will "undergo many changes and discussions," Netanyahu noted.

MK Elkin said of the proposal, "The leaders of the State of Israel saw Israel being a Jewish state as a basic principle, equal to democracy as a basic principle. Since the days of Supreme Court Judge Aharon Barak's Constitutional Revolution, the Supreme Court has systematically relinquishes Jewish national interest in favor of the democratic interest. The bill proposal was made to restore the balance and the equality between these two mechanisms in accordance with the classic Zionist perception."

The Balad party said in response: "The aim of those submitting the proposal is to make their racism and discrimination the law, and create two classes: equal civil officials (Jews) and less equal (Arabs). This is an extremely dangerous move that could finally establish a Jewish majority control of the Arab minority and pave the way for the enactment of racist and discriminatory laws against Arab citizens without judicial review." MK Dov Khenin (Hadash) said of the bill: "The advancement of the bill proposal is happening during days in which tension between Jews and Arabs in Israel is at its peak. This is a provocative initiative aimed to overpass democratic principles by the Jewish elite of the country. Instead of advancing dialogue and equality, Netanyahu and his partners continue to advance provocation and inflammation." The bill states that Israel is the national homeland of the Jewish people, which fulfills its desire for self-determination according to historical and cultural heritage, and that this right is unique to the Jewish people. It reinforces the state symbols (the flag, the anthem, and seven-branch candelabrum) and includes a section which states that the Hebrew language is the official language of the country with Arabic only having a "special status," which caused sharp criticism of the bill from the left. The explanatory notes of the Nationality Law state that despite the broad consensus among the Israeli public about the definition of Israel as a Jewish state, the notion that the State of Israel is the national homeland of the Jewish people was never enshrined in the Basic Laws of the state. The notes state, "The necessity of the Basic Law: Israel as the Nation-State of the Jewish people is especially reinforced at a time when there are those who want to abolish the right of the Jewish people to have a national home in their country, and the recognition of Israel as the national homeland of the Jewish people."

"The assertion that Israel is a democratic country besides being Jewish is protected in the second clause of the bill proposal and is interwoven into various clauses including those that deal with language, heritage preservation, community settlement, days of Shabbat, and protection of holy sites."