Peres: 'Nationality Law' - attempt to undermine the Declaration of Independence

Prime Minister Benjamin Netanyahu, former president Shimon Peres and current President Reuven Rivlin used a memorial service for Israel's first prime minister David Ben-Gurion on Thursday to lock horns over the controversial "Nationality Law."
"The Nation State Bill is an attempt to undermine the Declaration of Independence for political interests," former president Peres said. "The bill will damage the country both at home and abroad and it will erode the democratic principles of the State of Israel."
Ben-Gurion read out the Declaration of Independence on May 14, 1948, and some who oppose the “nationality bill” claimed that the bill conflicts the Declaration’s essential principles. 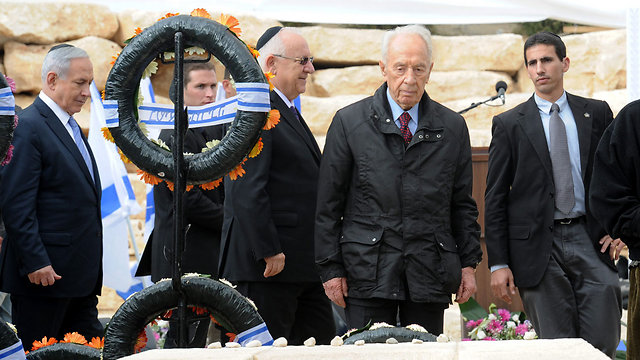 Netanyahu, Rivlin and Peres at the ceremony (Photo: Haim Hornstein)
“Today we gather at the grave of Ben Gurion with a trembling heart, for to my dismay, some fissures have surfaced within our nation which threaten to divide the people, to undermine the Declaration of Independence and to erode our democratic principles," said the former president, one of the founding fathers of the State of Israel alongside Ben-Gurion. "Ben Gurion's voice calls out to us and asks: How could a distinction between "Jewish" and "democratic" be made at all in the State of Israel?"
The argumenet over the Nationality Law, Peres said, "seems to many to be an unnecessary political addendum which will undermine the values which unite our people. An unnecessary religious argument, instead of a broad national concensus that could turn a political upheaval into a religious conflict which will be hard to stop."
“Ben Gurion was anxious about Israel’s moral security just as much as he was anxious about its existential security. ‘Our security,” he said, ‘will be paved not only by strength – but also on a policy of peace and friendship with our neighbors.’”

In his speech, Netanyahu hinted Ben-Gurion would have supported the proposed legislation.
“Ben-Gurion was one of history’s messengers," Netanyahu said at the memorial in Sde Boker. "The Declaration of Independence was not the final word, but just one stage in the journey to realizing the Zionist dream. He put a strong emphasis on Israel’s existence as a Jewish state.”

Netanyahu's speech quoted Ben-Gurion, who said in 1948 that he supported “Jewish democracy. The Western one isn’t enough. Being a Jew is not just a biological fact but also a moral and ethical one.” 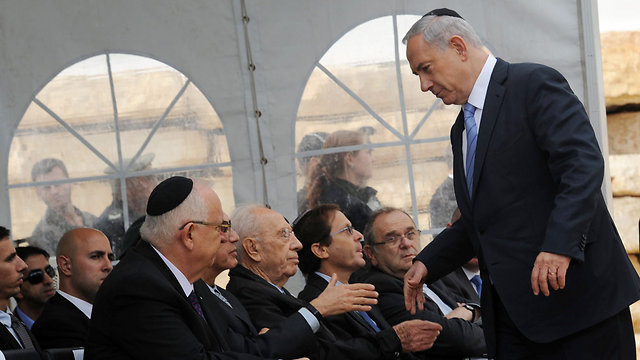 Netanyahu noted that Ben-Gurion was present when the conflict between Arabs and Jews first took root.

“He personally witnessed the Arabs’ refusal to recognize any rights over the land. Incitement and terrorism existed no less than today. His hope that Israel would be a national home for Jews was dashed time and again. But he did not lose hope.

"We want to attain peace with our neighbors, but we see the threats and the instability. And Ben-Gurion also saw them. His conclusion was unequivocal: Israel’s security must be safeguarded for the long term, based on power of deterrence. “

On Wednesday, the Knesset erupted in jeers as Netanyahu spoke about the proposed legislation to officially define Israel as a Jewish state. "The bill I will present will be based on Israel being a Jewish and democratic state,” said Netanyahu. “Israel guarantees equality of personal rights to all its citizens without discrimination based on religion, race, and gender,” he added.

Meanwhile, President Reuven Rivlin opposed the bill. Speaking after Netanyahu at the Knesset, Rivlin noted that the Declaration of Independence emphatically determines the Jewish and democratic nature of the State of Israel.

"The formulators of the Declaration of Independence, with their infinite wisdom, insisted that the Arab communities in Israel, as well as other groups, should not feel as the Jews had felt in exile."

Ben-Gurion headed the government for two terms. The first was between 1948 and 1954, after which he retired to Kibbutz Sde Boker. But in early 1955, he returned to serve as defense minister in Moshe Sharet’s government, and at the end of that year he was elected prime minister for the second time – a position he continued to hold until he stepped down in 1963.