The writing outside the synagogue

Russian books set on fire outside Beit El synagogue, with graffiti stating: 'Where Nationality Laws are passed, books will be burned.'

Unknown perpetrators burned books near a synagogue in Tel Aviv on Sunday evening in a protest against the "Nationality Law."

Worshipers arriving for evening prayers at the Beit El synagogue on Frishman Street found some 10 burned books outside the synagogue, with graffiti against the contentious bill proposal sprayed on the synagogue's outer wall. 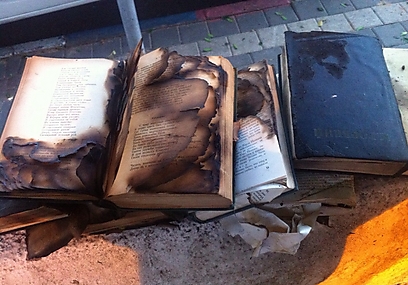 Torched books found outside synagogue
Rabbi Ariel Constantine, who runs the synagogue on behalf of the Tzohar organization, said the books were in Russian so it is yet unclear whether these were holy books or regular ones, and whether or not they were taken from inside the synagogue, which is attended by worshipers from different countries.

The graffiti on the wall read: "Where Nationality Laws are passed, books will be burned," a play on a quote by German romantic poet Heinrich Heine who said: "Where they have burned books, they will end in burning human beings."

Graffiti at synagogue: 'Where Nationality Laws are passed, books will be burned'
"In my opinion, this is a response to what's going on in Jerusalem," the rabbi said, referring to the arson at a Jewish-Arab school in Jerusalem on Saturday night.

He said the worshipers were surprised of the act of vandalism, noting this was a "modern" synagogue that accepts anyone who wishes to pray.

"We had MKs Dov Dov Khenin (Hadash) and Avishay Braverman (Labor), as well as Ayelet Shaked (Bayit Yehudi) and Ofir Akunis (Likud)," Constantine said. "We welcome everyone, we don't deserve what has been done to us."

Tzohar director Rabbi David Stav added: "I'm shocked by this, and without pointing an accusatory finger at any direction, I call on leaders from the right and left to iron out the issues in the Nationality Law in a calm and responsible manner, without harsh criticism." Police opened an investigation into the incident.