Education Minister Shai Piron announced the resignation of Yesh Atid ministers from Prime Minister Benjamin Netanyahu's governing coalition. "After the cowardly act which characterizes his conduct over the past few hours, the prime minister committed another act of cowardice which we are witnessing at these very moments."

The Yesh Atid member said he and his fellow ministers "had not choice but to join the finance minister and the justice minister because there is no point in a belligerent government, a government without a future, without hope." 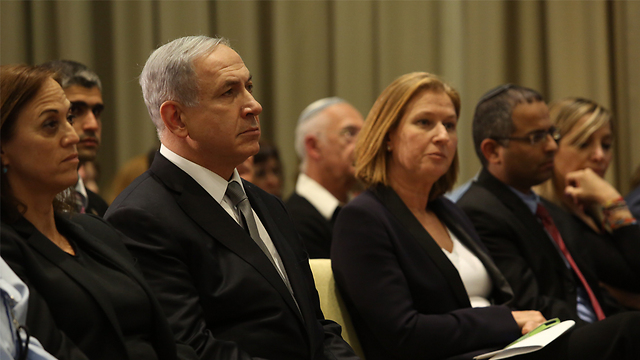 Netanyahu and Livni at the president's residence, an hour before the announcement (Photo: Gil Yohanan)

Former Shin Bet chief Yaakov Peri attacked the sitting prime minister for his statements, calling the speech "irresolute, cowardly, and on the border of hysteria. I am saddened that at such a time, when the State of Israel faces significant security, economic, and political challenges, the prime minister chose to drag Israel to unnecessary, expensive elections."

Justice Minister Livni was the only Hatnua minister left in the government, after Environmental Protection Minister Amir Peretz resigned on November 9 in protest of Lapid's 2015 state budget.

Netanyahu instructed Cabinet Secretary Avichai Mandelblit on Tuesday evening to issue termination letters to the two senior ministers, citing constant criticism aimed at him and his government from both Livni and Lapid.

The prime minister said he will call for the dissolution of the Knesset as soon as possible in order to go to elections and "receive a clear mandate from the people to lead Israel."