Legislation, which passed following the last elections, is intended to minimize government spending, but Likud sources say Netanyahu will have a hard time forming a stable government with so little ministries to offer.

While the amendment to the law limiting the number of ministers in the government to 18 has yet to go into effect, the Likud party is already planning to cancel it, sources within the party said.

The amendment to Basic Law: The Government, which passed following pressure from Yesh Atid and Yisrael Beiteinu after the last elections, will create a political conundrum to Likud leader Benjamin Netanyahu, who won't be able to form a wide government following the March 17 elections, and will have to deal with fierce battles within his party over ministries.

"When it's time for the Likud chairman to form the next government, the law - that we supported because of our coalition partners - will be history," a senior Likud official explained. "With this law in place, we won't have a stable government and it won't be able to govern." 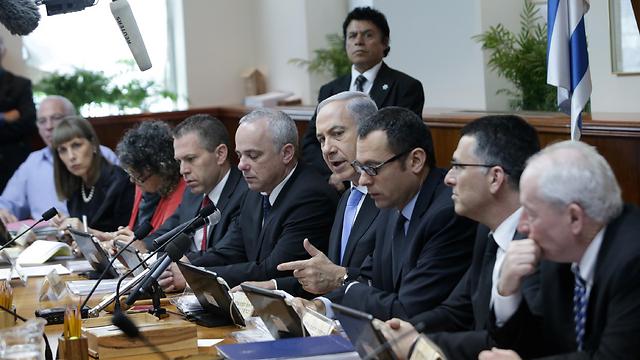 A crowded government meeting (Photo: Alex Kolomoisky)
Sources close to Netanyahu gave as an example the 32nd government (March 2009-March 2013), which survived for four years and had 30 ministers. "That was (the source of) its strength," they said. This isn't the first time the Likud party supports limiting the number of ministers - and then takes it back. In the past, the party supported a similar initiative by Gideon Sa'ar, but when it came time to implement it, the party changed its stance. It remains unclear how many ministers the Likud would offer to appoint if the law is cancelled, but during discussions in the dissolving Knesset coalition, former chairman Yariv Levin (Likud) suggested to have one minister for every 3-3.5 MKs. Meanwhile other parties, possible coalition partners in the next government, oppose the initiative to cancel the amendment. Sources in Yesh Atid said that "this is a Yesh Atid legislation and thanks to us there'll be an 18-ministers government in the next government as well." Yisrael Beiteinu said it would oppose any change to the legislation, and Moshe Kahlon's new party Kulanu said it supported keeping the existing legislation "in a way that stops unnecessary spending of public funds for political needs." Bayit Yehudi refused to comment, while Likud's official response was that "we will support leaving (the government) at only 18 ministers."