The campaign sparked a series of condemnations on social networks, and secular activists filed complaints with the Cnaan Media company, which is responsible for the bus ads.

The campaign's initiator appeared unimpressed by the growing chaos. "It's causing a mess?" he told Ynet. "Good, let it cause a mess, before we find ourselves in an even bigger mess."

He added that the disaster at the Har Nof synagogue forced every religious Jew to engage in self-examination, and that he believed the ultra-Orthodox public should be encouraged to be strict about issues like modesty and unity. 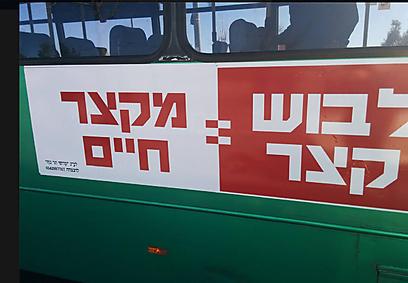 "It's clear that those who were murdered did not receive a punishment they deserved," he said. "They were righteous people. They woke up to pray at 6 am. They are public victims, and it happened to them because of us, because of our acts. A person cannot say that he doesn’t care. It's cruelty. When you deteriorate, it's God's severe judgment which has the final word."

As for the protests over the statement that "short clothing shortens life," the advertiser said: "Can anyone say for certain that it's not true?"

He stressed, however, that the message was directed at the haredi public, which believes in these values, rather than at seculars who were not educated on these values, although he added that "modesty will protect all of us – even those who are now complaining.

"I requested that the signs would only appear on the lines serving the public who really understands it but it trying to escape it. If we find it on the seculars' buses, I will ask them to remove the signs. That was not the intention. It's first and foremost my business. If I've already invested my own money, the advertising should be focused and reach the target audience."

Egged spokesman Ron Ratner said in response that the bus was part of the public domain, like "a street on wheels," and therefore the company did not see it fit to intervene in the content advertised on the bus by an external concessionaire, except in radical cases.

"We live in a tolerant democratic society, and as long as the ads don’t harm the state, its symbols or public sentiment in an intolerable manner – we shall not intervene," Ratner said.

He estimated that the protests was being led by interested parties and was affected by the upcoming elections, and added that "it is up to the Cnaan company to decide about the matter."

Ohad Givli, CEO of Cnaan Media, which owns the franchise for advertising on Egged buses in Jerusalem, said in response that the company did not necessarily agree with all the messages appearing on its signs, but that it did not see it fit to censor the ads or ask the advertiser to change the wording, as long as the ads did not offend a certain public in a radical manner or include expressions of racism.

In this case, he said, the ads convey a general message which encourages modest clothing and does not distinguish between different sectors or between the sexes, and therefore there is no room to intervene.