Isaac Herzog and Tzipi Livni announced on Monday evening that Maj. Gen. (res.) Amos Yadlin will be the 'Zionist Camp's' nominee for defense minister, should they form the next government.

The announcement came at the same it became clear that Shaul Mofaz, formerly IDF chief of staff and defense minister, would not join the list. 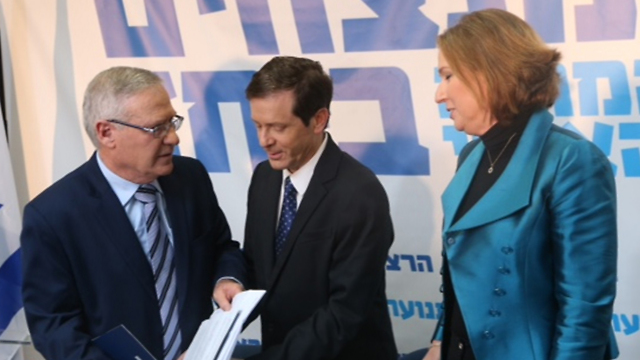 "I was born in a Zionist home, and the 'Zionist Camp' is my natural place," said Yadlin.

"Israel's security is based on the IDF being a strong army and a deterrent army – the strongest in the Middle East, but also on a firm strategic alliance with the United States and its social resilience.

There are opportunities alongside the threats. We must act with good judgment and prevent escalation,” he added.

Yadlin answered a question egarding Sunday's airstrike in Quneitra, which foreign reports attributed to Israel, by saying "it raises tensions in the face of that radical axis that rejects Israel's existence and does everything to hurt it.

"This axis is an enemy that does not recognize our existence, and we will have to deal with it. To do so successfully requires excellent intelligence. And at the same time, we must be very vigilant to make sure we are not headed for a confrontation and escalation that we do not want. We can trust the IDF to know how to carefully calculate its moves.

"Yadlin currently serves as the director of the Institute for National Security Studies. According to the Institute's website, Yadlin "was named director of Tel Aviv University’s Institute for National Security Studies (INSS) in November 2011, after more than 40 years of service in the Israel Defense Forces, nine of which he was a member of the IDF General Staff.

"From 2006-2010, Maj. Gen. (ret.) Yadlin served as the IDF’s chief of Defense Intelligence. From 2004-2006, he served as the IDF attaché to the United States. In February 2002, he earned the rank of major general and was named commander of the IDF Military Colleges and the National Defense College.

"Maj. Gen. (ret.) Yadlin, a former deputy commander of the Israel Air Force, has commanded two fighter squadrons and two airbases. He has also served as Head of IAF Planning Department (1990-1993). He accumulated about 5,000 flight hours and flew more than 250 combat missions behind enemy lines. He participated in the Yom Kippur War (1973), Operation Peace for Galilee (1982) and Operation Tamuz – the destruction of the Osirak nuclear reactor in Iraq (1981)."

Herzog called Yadlin "one of the most influential leaders in the defense establishment in the last few decades – since the Yom Kippur War, into his participation in the team that bombed the nuclear core in Iraq, and on through decades of service in the IDF.

"Amos proved himself as a daring, courageous, and responsible fighter, combining boldness with diplomatic wisdom."