A chance for Israel's Arabs

Op-ed: Lieberman's bid to exclude the Arab parties from the political system has backfired, and now there is a real chance for them to become legitimate partners in government.

For too many Israelis, Israeli Arabs are still the same Arabs and the sea is still the same sea into which they seek to push us, the tiny country that has never learned to swim. It's hard to point a finger at the Jewish public following way too many years in which Benjamin Netanyahu and co. have invested all their political capital into promoting this phobia.

But one can and should point a finger at the leaders of the center-left parties and the pundits and presenters in the election studios for excluding the Arab parties as legitimate partners in a future coalition government.

Good things have been taking place before our very eyes ever since Netanyahu in his arrogance decided to bring forward the elections: Parliamentarians who had been acting like there's no tomorrow and showing contempt for public funds and the law are waking up to police investigations; increased representation for women has become the in thing; party lists are being refreshed. And in the run-up to the elections, we can expect to witness additional processes that will help to purge and heal the government establishment, which has drowned in the euphoria of its power.

As the public begins to open its eyes, it is vital that we open another eye too, an eye that was closed during the typhoon of anti-democratic legislation that swept through the Knesset over the past two years and the harsh incitement that reached a peak during Operation Protective Edge – the eye that recognizes the importance of including the elected representatives of the Israeli Arabs in government and sees such cooperation as a Jewish interest. 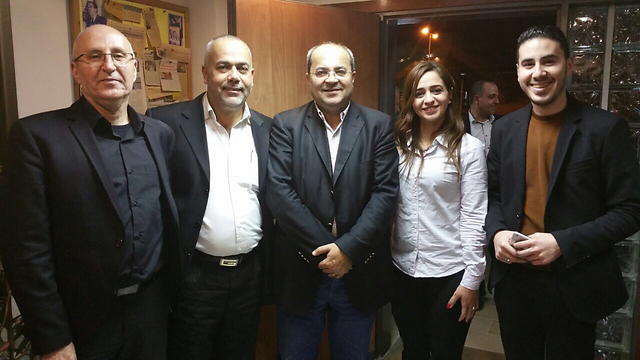 Avigdor Lieberman, who spearheaded the legislation to raise the electoral threshold with the purpose of excluding Israeli Arabs from the Knesset, must be having second thoughts about the move in light of his party's dismal showing in the polls; but in coming to destroy, he appears to have brought forth a blessing: The Arab parties were the first to rise and adopt the challenge and trend of the upcoming elections – the convergence into blocs.

And now, at the very place at which Lieberman sought to burst the dam of coexistence envisioned by the signatories to the Declaration of Independence, we have an opportunity to build a bridge with Israel's Arab citizens on true democratic foundations.

Creating a human bridge is the most challenging enterprise in the life of a society. This is what the founders of the state toiled over in their efforts to create a "melting pot" – in both good and perverse ways, but always with an understanding of the importance of creating a core of partnership in the country.

This is also the thing that has been bombed in a targeted political-killing operation and requires urgent rehabilitation, an end to the exclusion and a return to the construction of a partnership – and in the realm of government first and foremost.

This task rests primarily on the shoulders of the leaders of the center and left-wing parties, as well as the pundits and presenters in the studios, who continue to exclude the Arab parties from any coalition government as if it were the word of God and not an anti-democratic school of thought that needs to be eradicated.

The representatives of more than one million Israeli citizens must be viewed as worthy and legitimate partners in the governmental equation.