Prime Minister Benjamin Netanyahu's address to a joint session of Congress on Tuesday garnered mixed reviews from media outlets in the US and abroad. The controversial speech was broadcast live on all leading networks and was followed by a slew of panelists and analysts. CNN's chief international correspondent dubbed Netanyahu's performance on Capitol Hill "a very dark Strangelovian speech" while Fox News flattered the Israeli prime minister. But the most amusing commentary – and likely the most widely watched – belonged to Daily Show host Jon Stewart. 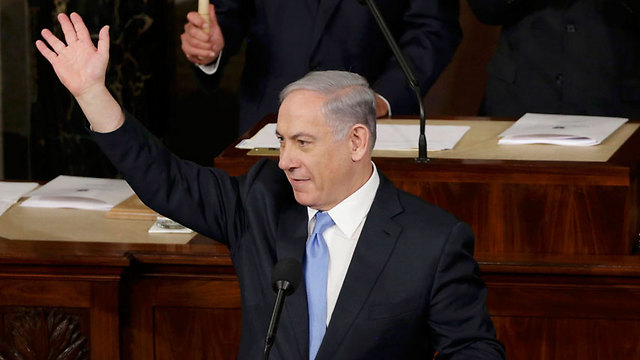 Netanyahu in Congress (Photo: Reuters)
With his trademark frustration, Stewart blasted Netanyahu for claiming to speak for the entire Jewish people ahead of "festival of slights" to celebrate the "sacred Jewish holiday of Suck-on-it." "The truth is no one can speak for all Jews for we are a varied and heterodoxical people... We like to argue," said Stewart a few hours after Netanyahu's speech.
Jon Stewart on Netanyahu speech
X

The revered satirist also took aim at US President Barack Obama's lukewarm response to Netanyahu's successive speeches against his administration's policy on Iran. "Their prime minister comes here and publicly slaps Obama in the face and the president's response is 'it's okay, everyone should know I'm buying him gloves so when he hits me it doesn't hurt his hand his much.'"

One of Netanyahu's most vociferous critics, New York Times columnist Thomas Friedman, lashed out at the "circus atmosphere" surrounding the address to Congress that left central questions unanswered. "What is America’s interest in striking a deal with Iran? Because our interests and Israel’s are not fully aligned. What is the minimum we need to satisfy our interests? And how should we balance the critiques of our policy from the serious Bibi versus the cynical Bibi?"

Jeffrey Goldberg, a senior journalist at the Atlantic close to the Obama administration, began his analysis of the speech but reviewing what "we already knew" like that "Benjamin Netanyahu certainly knows how to give a speech." "Netanyahu is eloquent in outlining the terrible crimes of the Iranian regime. But we already knew that. Netanyahu loves America. But we already knew that. Netanyahu doesn't have a plausible, realistic plan to keep Iran from gaining possession of a nuclear weapon. But we already knew that," wrote Goldberg. The well-connected columnist's central claim was that Netanyahu's speech was not intended to foil a bad deal with Iran but to criticize the Obama administration and sway swing voters in Israel. Top CNN correspondent Christiane Amanpour said that Netanyahu's address "was a very dark Strangelovian speech painting the picture of a dystopian world, raising the specter of a genocidal nation, a genocidal regime spraying nuclear weapons to annihilate the whole world and the whole region. Now, obviously many people are very concerned about Iran and there is a deep lack of trust, but surely the same was said of the Soviet Union all those years ago.

On the conservative side of the spectrum, Fox News unsurprisingly held a different estimate of the same address. Douglas Schoen, who served as a pollster for President Bill Clinton, argued that after weeks of suspense, Netanyahu delivered the goods in Congress.

Schoen noted that though 55 Democrats boycotted the address, "a far larger number than was projected," the chamber on Capitol Hill "was full and I know that those who were there benefitted from hearing Netanyahu’s warnings on Iranian aggression, their nuclear program and the repercussions for Israel and the world." Another raving review, however, originated from an unlikely source – the editor-in-chief of Al Arabiya English, Faisal Abbas – who urged Obama to heed Netanyahu's warning. "It is extremely rare for any reasonable person to ever agree with anything Israeli Prime Minister Benjamin Netanyahu says or does. However, one must admit, Bibi did get it right, at least when it came to dealing with Iran." Abbas writes that "the Israeli PM managed to hit the nail right on the head when he said that Middle Eastern countries are collapsing and that “terror organizations, mostly backed by Iran, are filling in the vacuum”; in just a few words, Mr. Netanyahu managed to accurately summarize a clear and present danger, not just to Israel, but to other US allies in the region."