Zionist Union leader Isaac Herzog, Netanyahu’s prime rival in the upcoming elections, continued a tour of Israel’s southern region, near the Gaza border, on Wednesday, visiting the Saroka Medical Center with running mate Tzipi Livni after reports of congestion and crisis in the Israeli health system.

“Thousands of people are moaning in emergency rooms, families are waiting hours upon hours for their loved ones to be admitted and receive treatment, and they say to themselves ‘Why is the health system in this state, on the verge of collapsing,’” said Herzog at a news conference held at the southern Israeli hospital. 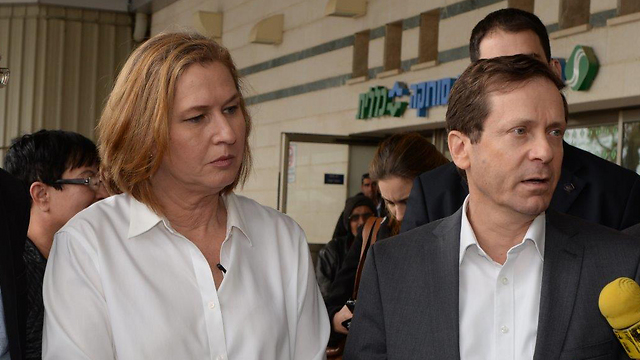 “The answer is that, among other things, it is not even on Netanyahu’s agenda. He has been the acting minister of health for the past two months, and we haven’t heard about one meeting he’s conducted on the issue,” said Herzog.

Before visiting the protest tent set up by workers fired from Israel Chemical’s Bromine Compound in the south, Herzog said that his coalition would present a wide-ranging plan to strengthen the health system, and would allocate a billion and a half shekel a year, including 300 million shekel to shorten lines.

“We will strengthen the human infrastructure, so that the pressure and frustration in the hallways and the sick person everywhere will no longer be seen,” said Herzog.

According to Herzog, the south could use another hospital. “The load on Saroka, as we saw during Operation Protective Edge, is too large. There is discrimination and oppression when it comes to medicine in the Negev. We came to look people in the eyes. They’re tearing out their hair and are asking why the national priorities are different here.”

Herzog directed his words at Netanyahu and said: “Thousands are dying and sick and I say to Netanyahu – you cannot inflame the discussion and forget that thousands of people in emergency rooms are asking themselves what happened to the health system under your responsibility for six years now."

Tzipi Livini also joined in on the criticism of Netanyahu and said: “The citizens of Israel and the sick people who are here do not need a prime minster who tells them what scares them, but rather one that will listen to them, what their fears are and what they are distressed about. People in the Negev and the periphery live less than those in the center. It’s related to what they receive in the area here, outside of the hospital, and to the ability of the hospital.

Unfortunately, instead of actually dealing with the Iranian threat, Netanyahu is dealing with his own campaign,” added Livni.

Directly referring to the affects of Netanyahu’s Congress address, Livni said: “Did people wake up this morning with the Iranian threat gone? No. Therefore, the speech did not help and even hurt the ability to operate against the Iranian threat.”

Tzipi Livni also referred to an incident that occurred Tuesday where Arab MK Hanin Zoabi had a soft drink poured on her head by an activist tied to right-wing activist Baruch Marzel during a discussion at a law school in Israel. “These are the future partners of a Netanyahu government,” said Livni.