Days after Netanyahu's Congress speech, senior American official vows: 'We will know when Iran breaks through to nuclear weapon production'.

The US is making an effort to calm serious tensions with Israel over the Iranian nuclear issue. A senior US official told Israeli reporters at a recent briefing that the agreement reached with Iran will not be limited to ten years, as has been widely reported.

"We're talking about several stages of the agreement that would last beyond a decade, and include transparency, supervision and a control mechanism that will ensure Iran's nuclear program does not reach nuclear weapons," the official said.

He said that the US and world powers are not rushing to reach an agreement with Iran, and will need additional time beyond the March 21 target date, in order to finalize the complex technical details of the deal.

The comments come less than a week after Prime Minister Benjamin Netanyahu delivered a fiery speech to a joint session of Congress, in which he denounced the agreement currently being formulated on Iran's nuclear program as "bad", and argued that a "better deal" should be drawn up. President Barack Obama dismissed his address as "nothing new."

The official noted that great effort was currently been made in order to ensure that Iran would need at least a year from the moment it decided to develop nuclear weapons to the moment when it possessed them.

"We want to have time to react if we find that Iran has violated the understandings, and has a covert channel to produce nuclear weapons," he said. And another US official said: "The agreement, which will be expanded well beyond a decade, will better achieve our objectives than a military strike that would halt the nuclear program for a shorter time period. 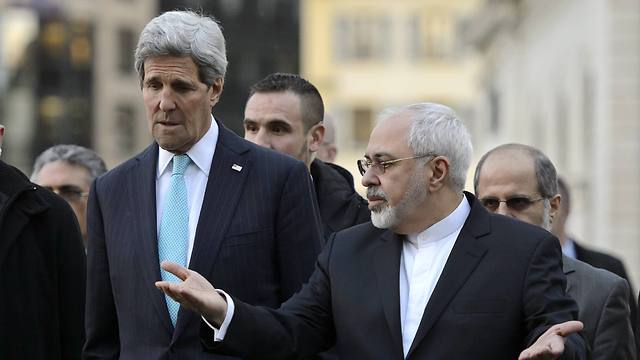 US and Iranian foreign ministers talk in Geneva. (Photo: AP)

"We think additional sanctions or a military attack would lead lran to expel IAEA inspectors and move the program underground. If after an agreement is reached, Iran tries to break through and acquire nuclear weapons, we and the entire international community will be able to use other means to ensure the world's safety."

The official stressed that there is no stronger alliance in the world than that of Israel and the United States. He said Obama has taken every step possible to ensure Israel's security, and that reaching an understanding with Iran will provide greater security for Israel, the US and the world. He also revealed that Israel's Military Intelligence chief, Major General Herzi Halevy is due in Washington this week for routine intelligence discussions.