Why Putin is playing friendly with Iran

Analysis: Putin's decision to provide Iran with the S-300 air defense system has three strategic goals, according to experts: Challenging US, securing Moscow's oil revenue and strengthening Russian position in the Middle East.

Russian President Vladimir Putin's declaration that he will provide the S-300 air defense system to Iran is meant to achieve three strategic goals, according to experts. 1. Challenging the US on Ukraine

The move to provide the S-300 the Iran could be seen as a way for Russia to challenge the US and the West in relation to the Ukraine crisis. Putin supports the pro-Russian rebels in eastern Ukraine, while the US' support of the Ukrainian government, which rules the western provinces of the country, is the root of great tensions not just between Moscow and Washington, but also between Russia and the European Union. 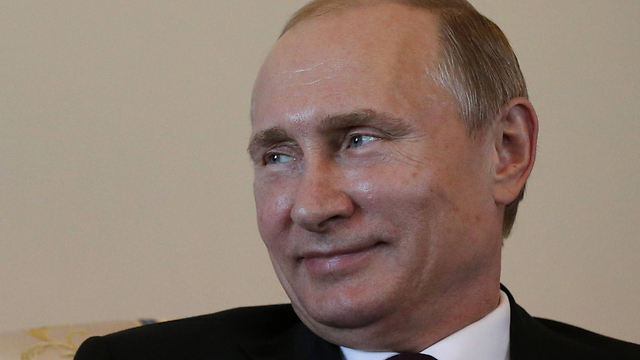 Russian President Vladamir Putin. (Photo: AFP)
The sanctions the West imposed on Russia after the annexation of Crimea and the fighting in eastern Ukraine create serious financial difficulties for Russia. Putin has created a situation where he is "punishing" the US in a way he estimates will hurt the Americans and their ally – Israel. 2. Oil revenues

Russia, which is the world's number one oil producer, is deeply concerned that the removal of sanctions against Iran will lead to a further drop in oil prices in the world market.

Arms War
S-300 will not prevent potential Israeli strike on Iran
Ron Ben-Yishai
Analysis: Should Russia give Iran the advanced missile defense system it will undoubtedly effect the possibility of a military strike – but Israel's air force is well trained in the system's ins-and-outs.
S-300 will not prevent potential Israeli strike on Iran
Iran was the third largest oil producer in the world before the sanctions were imposed on it. Now, it exports less than one million barrels a day, which is less than a third of its output capacity. However, if sanctions against Iran were to be removed, it will begin to market its oil freely and get rewarded for it – oil prices around the world will certainly drop and will primarily hurt the Russian economy. So the Russians found a solution: They were quick to establish ties with Iran before the sanctions were lifted so that Iran would pass on a significant amount of its oil production to Russian in exchange for weapons and Russian wheat. The Russian aim is likely to store the Iranian oil in Russia so that it will not reach the world market and by doing so prevent the further reduction of oil prices that would be fatal for Russia – all while promoting Russian weapons and agriculture industries. The economic outlook is most likely quite important in Russia's decision to arm Iran with the S-300 missile system. The Russians are no fools, and they took advantage of the deal that was obtained in Lausanne to be the first in the oil market and to determine its terms. 3. A key player in the Middle East

The selling of the S-300 missile system to Iran was also meant to reintroduce Russia to the Middle East as a major player at the expense of the US.

Putin has seen the US negotiating directly with Iran and preparing to make it a major ally in the Middle East. He's worried that if the US succees in warming up its relations with Iran, and at the same time keep its alliances with the Saudis, Egyptians and Israelis, the US will turn into a major world power in the Middle East. Putin wants to make Russia a player of similar value to the US in the Middle East, and is trying to ride on the S-300 missiles sale as an attempt to achieve this goal again.

In other words, the Israeli response to the Russian move is very mild compared to the sharp American response that was seen through the conversation between US Secretary of State John Kerry and Russian Foreign Minister Sergey Lavrov. Jerusalem is not making too strong of a protest and neither is Netanyahu – rather the criticism is coming from Minister Steinitz.

Why is this so?

One can certainly predict that Israel knows it will take a few years until the S-300 missile system is completely transferred to Iran and it can become operational, and maybe they also know things that Iran does not know regarding the system's abilities and Israel's own ability to neutralize this system. There is another possible explanation for Israel's bland response to the sale: Russia has already cancelled its embargo on the selling of S-300 missiles to Iran twice in the past, and then changed its mind when Israel's demands become greater – relating to arming Georgia for example. It is possible that Putin just wanted to flex a muscle and then change his mind later. This is certainly a realistic option.