Though allied throughout election, Netanyahu and Bennett have not met for over two weeks, as Netanyahu attempts to court center-right Kulanu and ultra-Orthodox Shas, leaving rightwing Bayit Yehudi feeling undervalued.

Prime Minister Benjamin Netanyahu met with Bayit Yehudi chairman Naftali Bennett at the former's Jerusalem office for coalition negotiations Friday morning. This is the first meeting the two have held since communications were cut off some two weeks ago, with Netanyahu busy courting other potential coalition members.

The meeting lasted an hour and a half and the two agreed to continue to work together to form the next government. 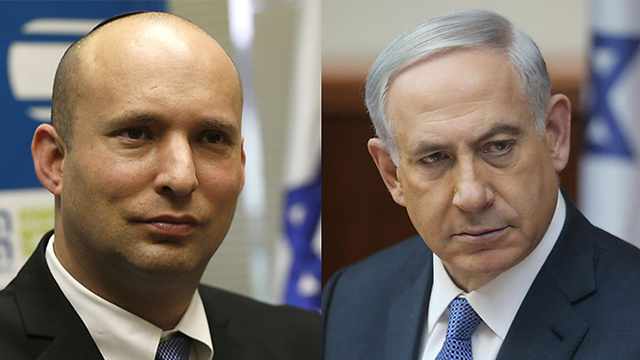 (L) Naftali Bennett / (R) Benjamin Netanyahu (Photo: Alex Kulmoyski / AFP)
The Bayit Yehudi won only eight Knesset seats during the last elections, a disappointing result in comparison to their previous 12 seats, which many thought they would only expand, cashing in on Bennett's widespread popularity. Throughout the elections, Bennett vowed he would support Netanyahu's bid to form the next government no matter what. But Netanyahu's last minute veer right at Bennett's electoral expense, coupled with a cold shoulder on the prime minister's part afterwards, led to growing anger within Bayit Yehudi ranks, who felt their support was being taken for granted. In addition, as reports said Netanyahu was secretly mulling a unity government with the Zionist Union, some Bayit Yehudi officials said they were being used leverage during negotiations continued with the center-right Kulanu party chairman Moshe Kahlon. Should Netanyahu chose to form a center-right coalition with the Zionist Union, Kulanu and Yesh Atid, the far right party could find itself outside of government, thus further straining tensions between the Likud and its 'natural ally' from the right. As of now, little of Bennett's demands are known, as the two have hardly spoken, though it has been rumored he is eyeing to want the Interior Security Ministry. The majority of attention in coalition talks has surrounded Netanyahu bid to court Kahlon's Kulanu and the ultra-Orthodox Shas party. On Thursday, Netanyahu attempt to end a two-week standoff between Shas and Kulanu by offering Shas leader Aryeh Deri the Transportation Ministry or an expanded economic portfolio in exchange for his demand for the Inteiror Ministry – parts of which are being demanded by Kahlon. Netanyahu wants to keep the Interior Ministry for his Likud party so he could give Kulanu authority over the ministry's Planning Administration. Deri, on his part, refuses to allow control over the administration to be taken from under the Interior Ministry – leading Netanyahu to try to offer him another portfolio altogether. Earlier this week, Shas was offered the Economy Ministry, the Ministry for the Development of the Negev and Galilee and the Public Diplomacy and Diaspora Affairs Ministry. On Tuesday, after Deri rejected the offer, the Likud's negotiating team attempted to improve upon the proposal or change it by offering Shas a senior economic portfolio - the Transportation Ministry, currently in the hands of Likud Minister Israel Katz who has angered Israelis by refusing to allow public transportation on Saturdays and holidays.

But sources on both Shas and Likud's negotiating teams said Deri is expected to reject that offer as well and instead insist on the Interior Ministry or the Economy Ministry with additional authorities.

Likud officials explained that since the Interior Ministry has already been promised to Deri, if no acceptable alternative can be found, the Shas chairman will likely get his way.

UTJ also has economic and religious demands which include maintaining the status quo on matters of religion and state, which means the de facto shelving of the Conversion Bill.