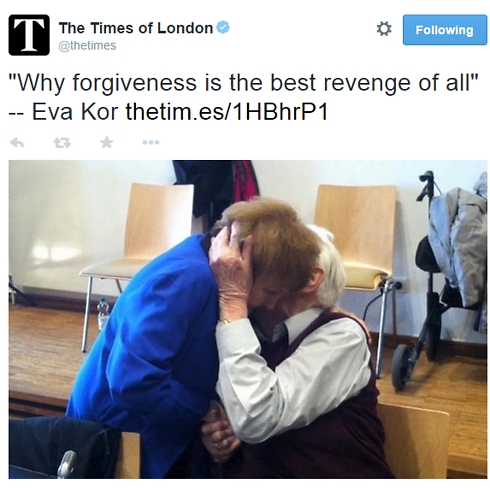 Eva Kor, 81, angers other Holocaust survivors when she approaches and embraces 93-year-old Oskar Groening during his trial in Germany. 'I will never understand why anger is preferable to a goodwill gesture,' she explains.

Eva Kor, 81, and her twin sister were among the "Mengele twins" who were treated as a human guinea pigs as part of notorious Nazi doctor Josef Mengele's cruel experiments at the Auschwitz concentration and extermination camp. Oskar Groening, 93, was an administration official, the camp's "bookkeeper."

Several days ago, during Groening's trial in Germany, Kor approached him, embraced him, shook his hand and forgave him, later explaining that they were just "two old people reaching out."

Groening was indicted as an accessory to the murder of 300,000 Jews at Auschwitz. Eva Kor from the United States is one of the camp survivors Holocaust survivors who have joined the prosecution as co-plaintiffs.

At the start of his trial, Groening expressed his regret, asked for the victims' forgiveness and acknowledged that he was "morally guilty" of the horrors which took place at the camp, but said it was up to the court to decide if he was legally guilty.

Groening guarded prisoners' baggage on the ramps, but his main task was to collect and tally money stolen from the new arrivals and then send it to Berlin - a job for which the German press has dubbed him the "Accountant of Auschwitz."

Oskar Groening in court. Acknowledged that he was 'morally guilty' of the horrors which took place at the camp (Photo: AFP)

Kor explained that she had decided to forgive Groening, but not the Nazi criminals.

Groening appeared shocked by Kor's gesture. She said he nearly passed out, but then smiled and kissed her on the cheek.

Kor's gesture angered the other Holocaust survivors who have joined the prosecution. "We cannot forgive Groening for assisting the murder of 300,000 people," said one of the lawyers representing them.

"I don't forget what they have done to me," Kor explained. "But I am not a poor person – I am a victorious woman who has been able to rise above the pain and forgive the Nazis.

"I know many people will criticize me for this photo, but so be it,” she wrote on Facebook after sharing a photograph of her and Groening holding hands. "It was two human beings 70 years after it happened. For the life of me I will never understand why anger is preferable to a goodwill gesture."