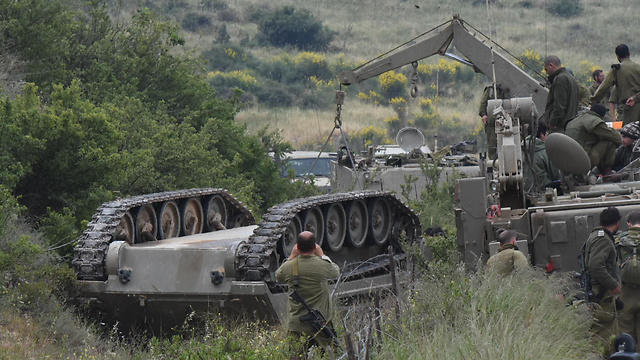 One IDF soldier was left in serious condition and three soldiers were lightly hurt Monday morning, when the armored personnel carrier in which they were traveling overturned on the Golan Heights.

Emergency personnel from Magen David Adom and the IDF evacuated the three to hospital in Safed.

The accident occurred during an extensive training exercise carried out by a reserve brigade of the Golan Heights Command Center. The exercise was stopped as a result of the accident and high-ranking officers from the 340 division of the Central Command arrived at the scene to investigate the accident.

According to reports, the driver lost control of the vehicle, causing the carrier to roll over. The IDF is investigating whether the APC was driving at excessive speed and whether the soldiers inside the APC were wearing helmets and flak jackets or vests.

In a seperate incident on Sunday, an IDF soldier was lightly wounded when an APC overturned during a training exercise in the Jordan Valley.

The soldier was evacuated to Belinson Hospital in Petah Tikva. The IDF launched an investigation into the incident.