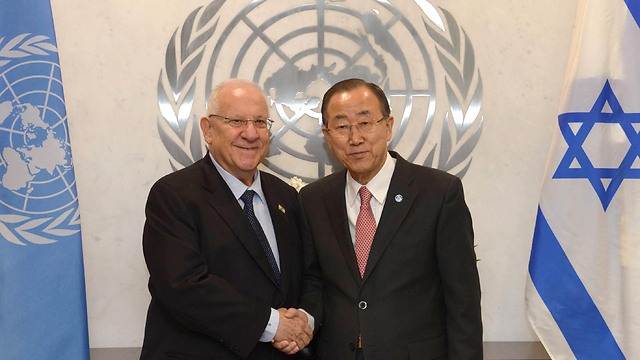 UNITED NATIONS -- UN Secretary-General Ban Ki-moon used the 65th anniversary of the UN agency that helps Palestinian refugees to appeal Tuesday for an immediate resumption of Israeli-Palestinian peace negotiations and an end to unilateral actions "that erode trust."

Ban told a UN conference marking the anniversary of the United Nations Relief and Works Agency that UNRWA was never meant to exist for 65 years, but "it exists because of political failure."

UNRWA Commissioner-General Pierre Krahenbuhl said there are over 5 million registered Palestinian refugees in the region today, which "equates to the population of Norway or Singapore."

He said they "face an existential crisis on many fronts," blockaded in Gaza by Israel, living under fear of detention by the Israeli army in the West Bank, and trapped by "a merciless siege and violence" in the Yarmouk refugee camp outside the Syrian capital Damascus.

"Their isolation, exclusion and dispossession represent a time bomb for the region, a denial of dignity and rights that must be addressed," Krahenbuhl said.

He said 65 percent of registered Palestinian refugees are under the age of 25, educated but unemployed, "determined to engage but with few prospects and limited freedom of movement to do so." He warned that this "will lead many to despair or increasing numbers to choose dangerous routes across the Mediterranean or beyond."

Yet, she said, "despite enduring the longest occupation in modern history and despite nearly seven decades of exile endured by millions of Palestine refugees, their national identity remains strong and their conviction in the justness of their cause remains unwavering as they seek to realize their long-denied inalienable rights."

Israel's deputy ambassador David Roet accused UNRWA of having a pro-Palestinian political agenda which goes beyond the scope of its humanitarian mandate.

He said the Palestinians' claim of the right to return "is a euphemism for the destruction of the State of Israel."

"This 'claim' is the real obstacle to the two-state solution," Roet said. "The only way to achieve peace is through direct negotiations."