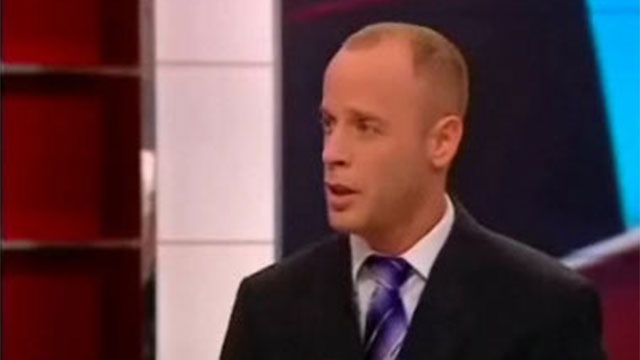 TV journalist 'tells all' about rape charges, after legally silencing his accuser

Yoav Even of Channel 2 had obtained court order to prevent alleged victim from naming him; now self-publishing own version of events that led to March 2011 arrest.

A television journalist accused of rape four years ago has written a book giving his side of the story, even though he obtained a gag order to prevent his alleged victim from ever discussing it in the media.

Yoav Even of Channel 2 television has asked the court to lift the gag order and is self-publishing a book about his March 2011 arrest for rape. In the book, the 41-year-old describes his plans to end his life if he were ever convicted for the crime.

"It is very possible I will pay a heavy price, perhaps very heavy, due to this exposure. But this story must be told," he writes in the prologue.

Yoav Even (Photo: Channel 2)
Even has been working on his book since his arrest, and is releasing it himself after he was rejected by publishing houses. In the book, "His Side," Even claims he is innocent. He does not deny the fact he met the complainant and had sexual relations with her, but says it was all consensual. The descriptions in the book are very detailed and include copies of the sexual conversations he had with the complainant before they met and the chain of events that followed - from Even's point of view. According to Even, he met the woman through Facebook, and they had sexual relations in his apartment on their first date. A month after their encounter, the woman filed a complaint with the police, claiming Even brutally raped her several times after drugging her with a "date rape" drug. During investigation, Even passed a polygraph test about using marijuana during their meeting, and was found to be telling the truth. The complainant did not undergo a polygraph test. A medical examination conducted by the police found no signs on the complainant's body that indicated a rape had taken place. Issues were also raised regarding photos she gave to police showing bruising on her body, allegedly from the assault. In addition, police investigators presented the complainant with messages she sent Even two days after the alleged rape, in which she appears to be trying to convince him to meet again. When she was asked about the messages she said: "I have nothing to say about this. It is majorly to my disadvantage. I did not plan for anyone to read this." "After two years of a not-easy fight to get a book published that everyone was afraid of releasing, I decided to release my book myself. The book was written in real time, starting from the moment I was freed to house arrest," Even writes in the prologue to the book.

"False complaints hurt not just innocent men, but real victims of sexual assaults because the accusers often encounter mistrust when they gather the courage to complain."

Even's book
The first chapter in the book, written on April 1, 2011 after Even was released to a 12-day house arrest, tells of the thoughts that ran through his mind at the time. According to Even, if the legal system chose to take a hard line against him, he would be released in 2027 at the age of 53. "A small cell with bars, an orange prisoner uniform and a one-hour daily walk in the yard. Sixteen years," he wrote. Even, who maintains that he is innocent, said that if he had been convicted of rape, he would have ended his life. "What is the point of sitting in prison for many years, when you know you are innocent? It's one thing if you committed the crime, any crime. Be a man, pay the price," he writes. "But like this? And what is the point of life after prison, with a Mark of Cain of a sex offender convicted of a crime he did not commit?"

Orit Sulitzeanu, the director of the Association of Rape Crisis Centers in Israel, has read sections of the book and says it reopens the victim's wounds. "The fact Even's case was closed due to lack of evidence does not mean it was closed due to lack of guilt," Sulitzeanu says. "The victim's side hasn't been heard. He wrote a detailed book with the intention of clearing his name, but the victim's voice is not heard. The post she wrote after the case came to light tells a different story."

Despite this, Sulitzeanu doesn't criticize the fact Even chose to release the book.

"I can't say it's a shame the book came out. Alongside all of the difficulties experienced by the victim due to the release of the book, this discussion is important and men must make sure they receive full consent in order to prevent sexual attacks," she said.

"Every case of sexual violence is complex, and usually it's his word against hers. Aid centers for sexual assault victims receive 40,000 phone calls a year, and only 15 percent file complaints because of the personal, emotional and social price." The victim's attorney wrote in response: "The case against Yoav Even was closed due to the lack of evidence and I'll admit that to this day I cannot understand what happened and why he was not indicted. "The issue at hand (like in many rape cases) was Yoav Even's criminal intent at the time the acts occurred. This is a question of whether the victim of the offense consented or not. "My professional experience convinces me that had an indictment been filed in this case, Yoav Even would have been convicted of committing a cruel act of rape and sentenced to no less than 10 years in prison. Perhaps even more.

"This is one of the more horrendous cases I've encountered in my professional life, full of violence and incomprehensible cruelty. In any case of a sexual offense, the victim is being objectified by the attacker. In this case, the objectification the victim endured kept me up at night. To this day, when I remember the investigation materials I was exposed to, I feel shock."

Danny Spektor contributed to this report