A' in an interview with Ynet 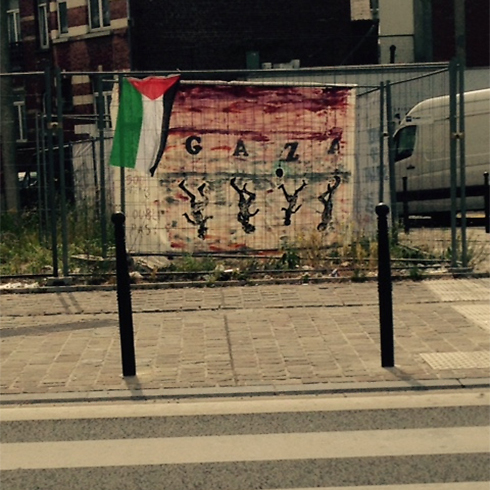 Israeli in Brussels: Anti-israel incitment will end in murder

A. calls on Israeli government to demand Belgium intervenes to stop incitement against Israel; 'You walk out of the metro and immediately run into a sign calling for a boycott of Israel'.

"Recently the incitement against Israel in my neighborhood had reached scary proportions," A., an Israeli living in Brussels, tells Ynet. "Signs on the streets call for a boycott, all the stores have tzedaka (charity) boxes shaped like the Al Aqsa mosque. People wave Palestinian flags in the streets, yelling profanities against Israel."

A. says that "If they knew I was Israeli - they would hurt me. Anyone who puts on a kippah and dares to walk 50 meters on my street will be attacked. I think the Israeli government needs to intervene and demand that Belgium stops the incitement against Israel, because the situation will end in an attack on Jews, or even murder."

A. lives with his fiancée in the commune Anderlecht in Brussels, Belgium. She is French doctor, and he has dual Belgian-Israeli citizenship.

Recently, A. moved into a new building in the heart of a Muslim immigrants neighborhood. "There is a lot of violence here, mainly among the Muslims," he says. "There are three mosques next to my house, and a Sunni cultural center which was burnt down by Shiites."

A. says that he hides his Israeli identity for fear of being attacked. "You walk out of the metro and immediately run into a sign calling for a boycott of Israel."

Signs in A's neighborhood
"The whole neighborhood is full of signs along the lines of 'children in Gaza are being massacred', and 'boycott Israel'. In the run-up to Ramadan, people were collecting donations for the Temple Mount, and for 'children being massacred by Israel,'" he adds. A. tells Ynet that "The Muslims here have created a link between Jews and Israel, and as such can attack Jews too. Just today I ran into a protest where children where yelling 'Nazi Israel'. It's not just Anderlecht. My uncle lives in Antwerp and he says things are similar there. Sadly, we bought an apartment in a bad area. We are trying to leave here as soon as possible. We would never bring kids into this neighborhood, which is filled with hate and violence. We are planning on leaving Brussels all together." A. is convinced that Israel needs to warn the Belgian authorities of the growing incitement, "They are looking for violence here. They will attack Jews because that is what they are being taught in their mosques." Robbie Spiegel, chairman of the Bonds in Belgium, and an activist in the Belgian Jewish community says, "These things are known. There are areas in Anderlecht that look like Gaza. Today walking there with a kippah is a dangerous act. The situation is even worse in commune Molenbeek and commune Schaerbeek. These areas have a large Muslim population. There are actually great relations between the heads of the Jewish and Muslim communities. In Brussels there are a few Saudi-funded mosques, which no one has any control over. We know about harsh anti-Israel speeches and incitement going on in these mosques." Spiegel says that "after the terrorist attack at the Jewish museum in Brussels, the local authorities began fighting anti-Semitism with an iron fist. But sadly, some Belgian politicians are drawing a line between illegal anti-Semitism, and calls for a boycott against Israel - which is seen by parts of society as legitimate."