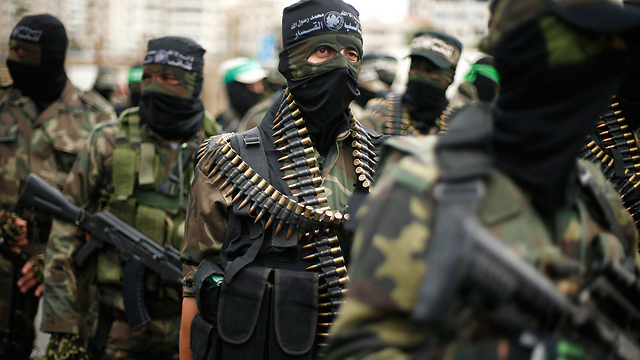 Hamas rejected a United Nations report released on Monday that found both Israel and Palestinian militant groups may have committed war crimes during Operation Protective Edge last summer in the Gaza Strip.

While Gaza's rulers rejected that its own fighters were to blame for war crimes, it welcomed the report's condemnation of Israel.

Senior Hamas official Ghazi Hamad said Monday that its rockets and mortars were aimed at Israeli military sites, not at civilians.

Izz ad-Din al-Qassam Brigade fighters (Photo: Reuters)
Hamad criticized the UN investigators for what he said was a false balance between victims and killers.

Meanwhile, Hamas spokesman Fawzi Barhum said the organization "welcomes the report's condemnation of the Zionist occupier for its war crimes during the last war against Gaza."

In an official statement issued by Hamas, the organization said that "This clear condemnation of Israel obligates bringing its leaders to the International Criminal Court and other international courts and put them on trial for the crimes they committed against our people. We stress it is important to set boundaries to Israel and stop the siege and the continuous Zionist aggression against our people and our land."

Saeb Erekat, a member of the executive committee of the Palestine Liberation Organization, said in a statement: "The State of Palestine will review the findings and recommendations of the (UN) commission with the highest consideration, in line with its staunch commitment to ensuring respect for these esteemed bodies of international law."

The Israeli Foreign Ministry also condemned the report's findings, saying the UN Human Rights Council was "a notoriously biased institution" that "has a singular obsession with Israel."

More than 2,200 Palestinians, including hundreds of civilians, were killed during the fighting, according to UN and Palestinian officials, while 73 people, including six civilians, died on the Israeli side.