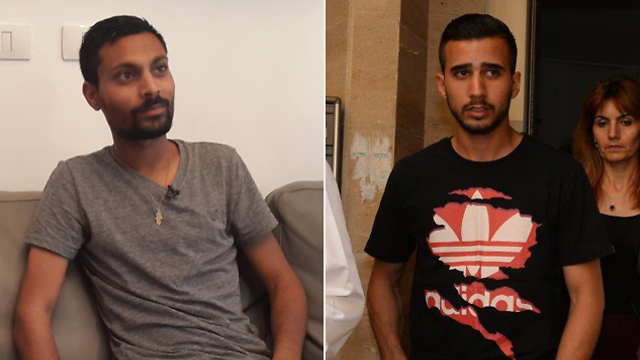 Niv Asraf faked his own kidnapping with the help of Eran Nagauker, causing the IDF to send massive troops to search for him.

Niv Asraf, who faked his own kidnapping in the West Bank, was indicted at the Jerusalem Magistrate's Court on Wednesday, along with his friend Eran Nagauker.

The two 22-year-olds from Be'er Sheva were charged with providing a false report and fraudulently obtaining benefits.

Asraf put the entire country on edge when he decided to fake his own kidnapping, hiding near Kiryat Arba while thousands of police and IDF troops searched for him. His friend Nagauker, who was serving as an NCO in the military at the time, reported Asraf's false abduction to the police.

According to the indictment, during their drive to Kiryat Arba on April 2, 2015, Asraf told Nagauker that he planned on disappearing in the hopes that the media attention will make his ex-girlfriend worry about him.

After arriving in Kiryat Arba, the two planed how they would fake the disappearance, and looked for a hiding place, the indictment said. Asraf then left for the hiding spot as planned, while leaving his cell phone in the car to prevent his location from being traced.

According to the indictment, Nagauker then left Kiryat Arba, stopped on the side of the road, took the air out of the car's tires, replaced one of the tires with the spare, and turned back to Kiryat Arba.

Upon entering Kiryat Arba, he turned to a police officer who was sitting in his car on the side of the road, and according to the indictment gave a false report in which he stated that his friend has been gone for 30 minutes after he left the car and walked towards an Arab village.

The officer instructed Nagauker to call 100 (the police emergency call center), which the indictment said he did knowing it was a false report. The two allegedly wanted to induce a large scale reaction from Israel's security forces, in order to garner massive media coverage.

As a result of Nagauker's report, the military put into action its emergency procedure, fearing that Asraf was kidnapped. Thousands of soldiers, several Special Forces units, aircraft, and other technological measures were deployed in the area to search for Asraf. The army set up several checkpoints in the area, and sweeps were conducted in nearby villages, while restrictions were imposed on local residents. In some cases, clashes broke out where the military was conducting its search for Asraf.

All the while Asraf was in his hiding spot, with the indictment claiming he knew forces were searching for him because of the loud sirens of emergency vehicles operating in the area. Close to 7 pm, Nagauker gave another statement to the Hebron police department, wherein he admitted to giving a false report, while being aware of the ongoing search for his friend.

The indictment stated that in the months leading up to the incident, Asraf had been partaking in illegal gambling. His gambling habit left him owing a hefty debt to several people, leading him to search for a way out of the debt. That is how he came upon the idea of faking a kidnapping near Hebron, in an attempt to influence the creditors through the media. In his defense, Asraf claimed that he tried to contact the police in order to tell them that he was being blackmailed by creditors, and decided to disappear when he felt he had no other recourse. Nagauker's lawyer, Itay Itzhak, said in response: "Only in Israel is an event with wide media coverage translated into an indictment without legal basis. We are currently studying the indictment."