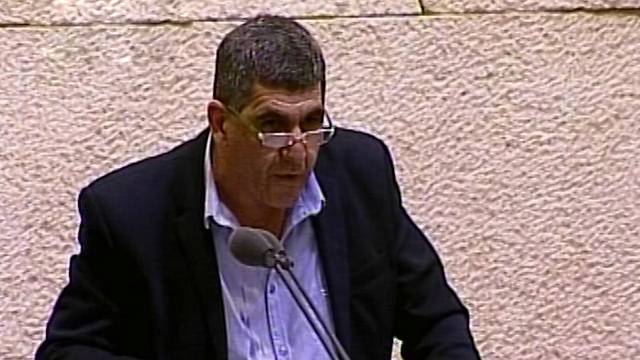 Deputy interior minister to Arab MK: Israel is doing you a favor by giving you citizenship

Furor erupts in the Knesset following controversial remarks, leading to back and forth between Arab, other left-wing MKs and coalition members.

Deputy Interior Minister Yaron Mazuz (Likud) caused an uproar in the Knesset on Wednesday when told Arab MK Hanin Zoabi that the State of Israel was "doing you a favor in giving you ID cards" during a discussion on the Citizenship and Entry into Israel Law.

Mayhem broke out following the controversial remarks, with MK Michal Rozin (Meretz) walking up to the podium with her ID card, while others demanded Mazuz to apologize.

Mazuz's refused to apologize for his remarks and said: "Anyone who supports terrorism won't be here."

MK Hanin Zoabi from the Joint Arab List demanded he apologize, saying "We won't allow you to continue to speak," while other MKs called out "Shame on you!"

But Mazuz was unfazed and turned to Knesset Speaker Yuli Edelstien, telling him "Send them out, (they're) insolent."

The session then broke out into yelling and furor, bringing the discussion to a halt.

Prime Minister Benjamin Netanyahu then took to the podium, saying: "I want to say two things: the right to be elected and to elect is a universal right - that is not the discussion. I am talking about the issue of hypocrisy. I can tell the difference between the two things, you have the right to say these things, and the right is given, and we will protect that right, I will protect it. But we don’t have to agree with the hypocrisy. I didn’t hear condemnations from the MKs here on the real war crimes happening in Syria, and Yemen. I didn’t hear a word on these issues, all I hear is false preaching against IDF soldiers."

"All citizens of Israel, Jews and non-Jews, have a right to vote and be elected, however every citizen has the duty to obey the laws of the land. No one has the right to raise false accusations of war crimes against IDF soldiers who protect all of us," he added.

Sliman responded to Netanyahu, saying, "Those who expected the prime minister to defend our right to do our jobs must have been dreaming. The prime minister is justifying Yaron Mazuz's campaign of indictment. We are being slandered. A government built on rampant incitement, only such a government can pass a law that collectively disinherits the right to family life from the Palestinians. Those talking about terrorism should see that they are using terrorism. No one is doing me a favor by giving me an ID card."

Likud MK Oren Hazan yelled at her: "It's shameful that you are here," while Culture Minister Miri Regev joined in, calling out from her seat: "Anyone who gets on a flotilla should turn in their ID card."

The Citizenship and Entry into Israel Law is a temporary provision, and was approved by the Knesset on July 31, 2003. It authorizes the government to extend the provision, which it does every year, while adding amendments.

The Israeli government used this provision to stop granting citizenship under the framework of family unifications to residents of Gaza and the West Bank who have relatives living within the Green Line. The law gives the interior minister and the commander of IDF forces in the West Bank the authority to grant the status of permanent resident in special circumstances.

MK Suliman's proposed legislation, which meant to appeal the extension of the citizenship law, was rejected by a majority of 55 against, compared to 18 in favor, and two abstained. A smiliar proposal by Meretz leader Zehava Galon was also rejected, with 54 against, 17 for, and two abstained.

A large portion of the opposition was not present in the plenum at the time of the vote, while some of the MKs, including Opposition Chairman Isaac Herzog (Zionist Union), chose not to participate in the vote even though he was present. Zionist Union MKs Omer Bar-Lev and Itzik Shmuly chose to abstain.

In response to the Zionist Union MKs' decision not to vote, Meretz leader Galon announced her party would not attend opposition meetings until further notice.

Zionist Union co-leader Tzipi Livni spoke after the contentious vote, saying, "I entered the plenum to vote against the proposal to cancel the citizenship law, a position which in this case happens to be the same as the government's position. And then a deputy minister gets up to the podium and announces he will revoke the citizenship of anyone who acts or talks against the state, with each word becoming more and more inciting, bad, and meant to shut people up. He is not talking on his own behalf, but on the behalf of the government.