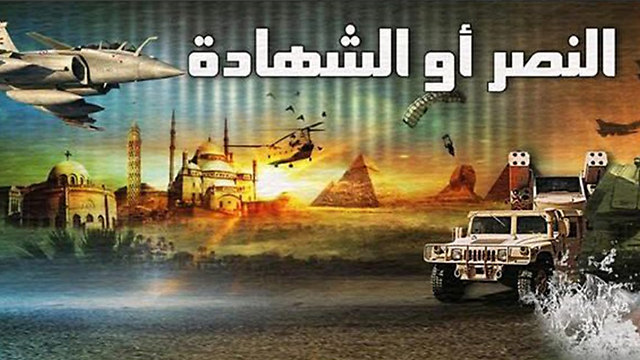 Everyone against ISIS: Hamas and Egypt's mutual interest

Analysis: In the shadow of a brutal terror attack in Sinai, Egypt and Hamas, typically sworn enemies, find common ground in the battle against ISIS destabilization.

Lately there have been reports in Arab media outlets describing a thawing or "honeymoon" in the relations between Hamas and Abed Fatah al-Sisi's Egypt, after a long period of mutual bad blood, largely due to Hamas being a subsidiary of the now outlawed Muslim brotherhood. The key to improving these relations lay in the recognition of a mutual interest between Cairo and Gaza, an interest which was thrust into the spotlight Wednesday, in the form of the battle against ISIS.

On Tuesday, ISIS members in the district of Haleb in Syria published an unusual video which was titled "A message to our people in Jerusalem." The true purpose of the video, however, was to warn Hamas (who has been arresting ISIS members in Gaza for sporadically firing rockets into Israel), and to generally challenge the idea of Hamas rule. The tape threatened that ISIS would end Hamas rule, and challenge its authority in Gaza, with full knowledge of how unstable Gaza currently is.

Egyptian army logo: Victory or martyrdom
In the meantime, the terrorist attacks in Sinai on Wednesday - which killed scores of Egyptian security forces - reminded both Hamas and Egypt that the ISIS cell in the area is alive and kicking, and advancing with time.

Dating back to his earliest days as Egypt's leader, al-Sisi made it clear that he would not allow Egypt to become a staging base for attacks against neighboring countries. In other words, Israel. Egypt is however, currently embroiled in a life or death battle against Sinai terror cells. Many of theses cells recieve supplies and people from Gaza, which has forced Egypt to seek a partner in Gaza who can address these issues, that partner is Hamas.

ISIS weapons in Sinai
This partnership does not however, trounce the Egyptian dislike for the Gazan organization, nor does it erase the memories in Egypt of Hamas support for Sinai terror, and treatment of jihadist wounded in Gaza. Even Israeli officials brought up Hamas's armed wing's support for jihadists during the breakdown between the organization's political and military wings.

Al-Sisi believes that if his discussions with the Hamas's political echelon can achieve even a 20% reduction in Hamas involvement in Sinai, he will have made a clean profit. The side effects of these discussions are also visible in the regime linked Egyptian media, which has seen a sharp drop in anti-Hamas retoric and incitement. It's fair to assume that the shift coame as a result of a command from the top.

Sinai Offensive
ISIS in Sinai is a serious threat to Israel
Ron Ben-Yishai
Analysis: The impressive fighting abilities demonstrated by the Islamic State in northern Sinai pose a new challenge to the IDF. The use of simultaneous suicide bombings, imported from Syria and Iraq, could one day be directed at Israel.
ISIS in Sinai is a serious threat to Israel
The Rafah crossing is also key to this matter, as it is the physical link between Gazans and the outside world. The crossing has been opened by Egypt more and more frequently as of late. Cairo is well aware of publications stating that Israel and Hamas are holding indirect talks through Qatar in an attempt to reach a long lasting cease fire, and Egypt does not want to be left out. The Egyptians are also aware of the new Saudi leadership's initiative to establish a wide Sunni coalition including: Egypt, and its rivals Turkey and Qatar, against Iran and the Shiite triangle. It is fair to assume that one of the Saudi goals in this coalition is to prevent Hamas from strengthening its old ties with Teheran. As such the current situation seems to show Egypt making concessions to Hamas on the Rafah crossing matter. In many instances Egypt has opened the crossing for domestic reasons (transporting building materials into the strip creates jobs for Egyptians in El-Arish), and often the primary goal is to anger Qatar, with Egypt being viewed as Gaza's only true savior. While Wednesday's deadly terror attack is most likely going to affect the rate of crossing openings, continuing to open Rafah serves Egypt's key strategic interests.

One of these strong strategic interests is promoting a diplomatic process between Israel and the Palestinians. al-Sisi's aid to Gaza will prevent Hamas from trying to scuttle new attempts at negotiations between the Netanyahu government and the Palestinian Authority – something the Egyptians are very interested in seeing. The public warming of diplomatic ties between Israel and Egypt, including the selection of a new Egyptian ambassador to Israel, and the Director General of Israel's Foreign Ministry, Dore Gold's visit to Cairo, should be viewed as a part of this process.

Egypt took over the leadership of the Arab League in March, and has so far promoted two important process: The first of which is creating a joint Arab force to fight terror, and the second is disbanding the committee monitoring the advancement of the Arab peace plan – which included countries with no interest in promoting a peace process, like: Qatar, Sudan, Algeria, and Lebanon. Instead a new committee will be established in which Egypt, Jordan, Morocco, and Saudi Arabia will take the lead.

These four states have a strong interest in promoting a diplomatic process with Israel. The Egyptians want to take advantage of their position in order to try and restart the defunct peace talks – before the Palestinians turn to the UN Security Council in September.

History shows that the Egyptians don’t believe in one-sided moves, like those being pursued by the Palestinians. al-Sisi is closer to the international ideals of negotiation than to a pre-planned solution like the one being proposed by France.