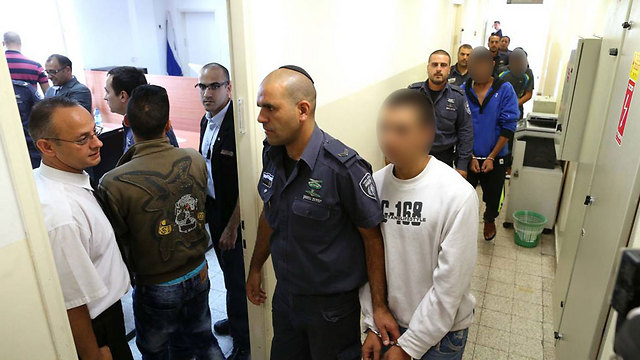 Palestinian gang caught, suspected of assaults against Jews in Jerusalem

Jerusalem police arrest 7 members of a gang who attacked Jews walking along the Armon Hantziv Promenade in the capital.

Seven Palestinians were arrested on suspicion of being involved in three assaults on Jews at the east Talpiot (Armon Hanatziv) Promenade in Jerusalem, it was cleared for publication on Tuesday. The Jerusalem Magistrate's Court extended their remand for the third time on Tuesday. Three of the suspects, residents of Abu Tor, are minors.

The first attack was allegedly carried out on June 23 after Ramadan prayers. A Jewish couple strolling on the promenade fell victim to the attackers, suspected of beating them using brass knuckles. Witnesses say the couple had a dagger on them which they did not use. The man fainted on the spot.

The district commander said: "These were serious attacks against civilians wishing to enjoy themselves. The professional and determined work of Jerusalem's Central Unit combined with the operational district forces and Jerusalem Border Police units led to the rapid arrest of the suspects."

A few months ago, Arab youths threw stones at Meir Nakar Street in the east Talpiot area, near Jabal Mukaber. There were no casualties, but a parked vehicle was damaged. Border Police forces called to the scene dispersed the protesters, after being attacked with stones themselves. Last December, a Molotov cocktail was thrown on a balcony in the neighborhood and caused a fire in the apartment. The apartment was damaged.