Shalit reunited with his father - as Netanyahu and Barak look on
Photo: IDF Spokesman 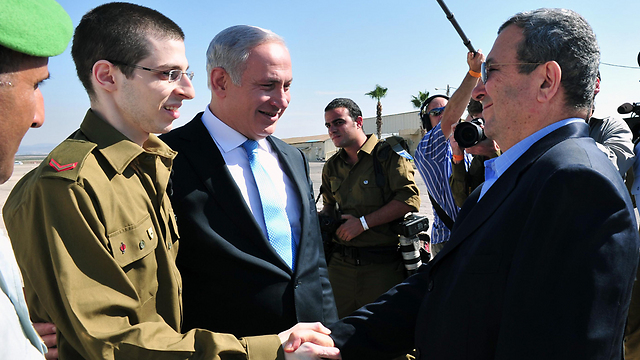 A tug of war over Shalit

Op-ed: As national hasbara unit head, I was summoned for a meeting ahead of Shalit's release. At the end of the meeting, Barak arrived at the most important question: Who will document the captive soldier's return. One could mistakenly think the purpose of this deal was the politicians' victory photo, but it was a photo of failure.

History, a lot like people, is afflicted with a certain amount of cynicism. It lends itself to the personality of its writers and to the needs of the times. It's true for every place on earth, and it's particularly true in the Jewish state, where history has quite an advanced sense of humor.

I once made the big mistake of agreeing to write a chapter in the history of a military unit. The events took place several years after the state was formed, and the testimonies were based on the memory of living people. When the task of writing was complete, mediation began. Every person wanted the story to be told a specific way. The arguments led to the work being shelved.

Historian Basil Henry Liddell Hart once described how the British officers fixed up the protocols of failed battles in World War I. The French were smarter, they only wrote the orders in hindsight. Based on the results. I was reminded of that this week in light of the circus around Ehud Barak's recordings. Burdened by history, which is important to him in order to shape the present.

Fighting over the victory photo (Photo: Ariel Hermoni, GPO)
Barak is the man who returns to politics in his own way. I have a personal interest in the last of the recordings, in which he is heard talking about the Shalit deal. In December 2011, I was the head of the national hasbara division at the Prime Minister's office. Two days before Gilad Shalit's release, I was summoned to Barak's office to discuss plans. Someone like me stands at attention when he is invited to a meeting at the defense minister's office. A reflex created from years of Israeli education. Despite that, I offered to send someone else. I heard a rumor about a political argument over who will document the event. Barak's office refused, and I went to the Kirya army headquarters.

It was an interesting situation. Coffee, cookies, maps and documents were waiting on the table. Not necessarily in that order. Around the table were the chief of staff, commanders and other advisers, and on a screen there were the different stages of the operation to return Shalit. The politics I was worried about were gone. Instead, there was data, like in any other military operation I've encountered in the past: Timetables, flight methods, security and intelligence. A discussion that was completely security-oriented, professional until a moment before it was wrapped up, when they came to the question of who is going to document Shalit's return. Several of those present buried their faces in their documents, others stared into the air. If anyone was feeling uncomfortable with the sharp transition to dealing with each and every frame, he didn't say anything.

Barak, Netanyahu and Gantz with Shalit (Photo: Ariel Hermoni, Defense Ministry)
Minister Barak appeared bothered by the fact the Government Press Office (GPO) is the one documenting the event and not Defense Ministry photographers. The IDF Spokesman was talking about his own team, and I must say that in my foolishness I did not realize just how these trivialities at the end were the main event. Each operation has its purpose. Anyone peeking into the discussions in some of the government offices at the time would have mistakenly gotten the impression that the purpose was the politicians' victory photo. When the meeting ended, it was agreed that photographers and cameramen of all kinds will be present. The IDF will have its team from the IDF Spokesman's Office, the defense minister will have his own people and the prime minister his people. A photograph to each man and documentation to all comers. So, heavens forbid, no important minute is missed. It was one of those days in which one could cram into his brain, all at once, an entire degree in political sciences, and another thing or two about national priorities. In the recording released this week, Barak is heard claiming that the pursuit of a photo with Shalit was petty. He's right. They were all plagued with pettiness, including him. Focusing on small moments rather than asking the big questions. The same was true for the Shalit family's PR people, who tried to sneak into the Tel Nof base; the generals who each came equipped with a photographer; the prime minister; the defense minister; and anyone who came in contact with Shalit.

The loss of innocence

It's a bit disturbing to know the truth of what goes on behind the scenes, to lose all innocence. Except that it's not the real problem. Seasoned politicians will always know how to make sure they're on the right side of history. It's not the pettiness that matters, it's the end goal.

Barak and Netanyahu turned Shalit's return for the price of a thousand terrorists to a photo of victory. A poor soldier who was taken captive in an incident borne of military failure in Kerem Shalom. An entire nation capitulating to a terror organization, negotiating with it (yes, it already started back then with Hamas) and paid the price it repeatedly declared it would not pay. This is the photo they were after. This is the strange victory of December 2011.

Netanyahu greeting Shalit upon his return (Photo: Avi Ohayon, GPO)
Before I started working at the PMO, I wrote again and again against the wholesale release of terrorists. The campaign to free Shalit was, in my eyes, meant to pressure Olmert as a prime minister. To a certain extent, my opinions on the topic were similar to those of the head of the opposition at the time, Netanyahu, the man who spoke against the release of terrorists in his book "A Place Among the Nations." In reality, the complete opposite happened. I was part of the release, a result of the campaign of pressure. To me, the embarrassment was not in the arguments between the different offices over the photo with Shalit, it was that there actually was a "victory photo." If they decided to release him for a thousand terrorists, they should have at least comprehended this was not a "victory photo," but "photos of failure" - photos that reflect the distance between political statements and what actually ends up happening. Back to the Barak recordings. There is a reason why they are being released now, why the arguments over credit and responsibility are arising now, why Barak is boasting about the Shalit deal, and accusing the other ministers' weakness for the fact Iran is a nuclear threshold country. It's natural for one person to write history from one point of view (his own), while others take a different point of view. Leaders all over the world have done the same. Churchill was able to become an impressive figure in history mostly because he chose to write that history himself. Churchill was a writing prodigy (he won a Nobel Prize for his history books) and a prodigy in understanding human nature. Barak is a prodigy in other fields.

As far as Barak is concerned, every moment in which he is out of the political system is a waste: His strategic thinking, his insights, his sobered perspective of reality. As far as others are concerned (mostly those who used to be among his supporters), it's the other way around. Let him be wasted outside for as long as possible. Barak erred, divided the Labor Party. Some view him as the one responsible for the Israeli left wing's collapse. They are intentionally exaggerating. Reality is stronger than any Barak. He's not the one to blame for the fact that there is no partner for peace or that Arafat was Arafat instead of Mahatma Gandhi. He could not have changed his surroundings - to burn the jungle surrounding the Israeli villa, as he so accurately put it. On his way to politics, he can only change the stories about himself.

This is what he's doing now. To a large extent, that is his right. Even when he's being manipulative. The accusations of leaking from cabinet meetings he attended are, at best, political inconsistency. In the State of Israel, the cabinet is leaking like a strainer. It's outrageous, but it's the reality. That is why Netanyahu, on his second term, created the octet, that's why he holds the most sensitive meetings in his own office. Those worried about the way the Israeli cabinet is operating should have demanded action against the leaks during Operation Protective Edge. To this day, no one has investigated how a top secret presentation with the IDF's operational plans was leaked from the cabinet to Channel 2. It's a scandal that just dissipated. Those who were worried about confronting leakers because they are politically powerful cannot now choose to pick only on Barak. The leaks from the cabinets are a serious problem. All the time, throughout the years – when it tarnishes the prime minister's image, and even when it's not. As for Iran, we didn't need new leaks to know Israel did not militarily attacked Iran. This possibility was raised on the public's agenda twice (2010 and 2012) and was reported several times because it was intentionally leaked. There was no decision made because no one ever went all the way. Who's responsible? Everyone. And mostly Netanyahu and Barak. Just like the Shalit deal, there are those who view the lack of decision as a photo of victory. I view it as the disaster that led to the problematic agreement with Iran. The more time passes, the clearer it becomes just how much of a tragedy this agreement is for the region and how irreversible it is through diplomacy. The Barak recordings are a reminder of the decisions that weren't made. Nothing more. Whether accurate or not.