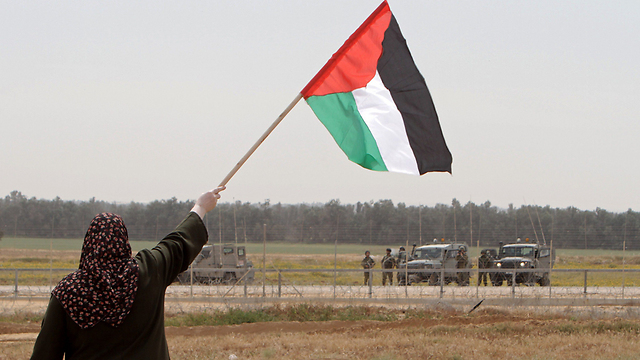 Israel slams Palestinians' push to fly their flag at UN

Ron Prosor, Israel's envoy to the UN, calls PA initiative 'another cynical misuse of the UN by the Palestinian Authority,' adding: 'It's time to unequivocally tell them: This is not the path to statehood, this is not the way for peace.'

Israel complained to the United Nations on Tuesday about a Palestinian initiative to fly their flag alongside those of full member states at the world body's headquarters, calling it "another cynical misuse of the UN by the Palestinian Authority."

Currently, only member states' flags fly at UN headquarters. While the 193-nation assembly overwhelmingly approved the de facto recognition of the sovereign state of Palestine in 2012, a Palestinian attempt to secure full UN membership failed. Palestine is considered a non-member state.

But the flags of the two non-member states - Palestine and the Vatican - could soon be flying at the United Nations.

Palestinian Ambassador Riyad Mansour told The Associated Press that he expects a revised draft to be circulated on Thursday and a vote on September 10, though a General Assembly spokeswoman said no date had been set.

He said he expects an "overwhelming majority" of states to support the resolution.

It states that "observer states maintaining permanent observer missions will raise their flags after member states," Mansour said. And it gives Secretary-General Ban Ki-moon 20 days to implement the flag-raising provision.

Mansour said he would like to see Palestinian President Mahmoud Abbas raise the flag after he addresses the General Assembly's annual gathering of world leaders on September 30. He said if the Holy See wants to raise its flag in time for Pope Francis' visit to the UN on September 25, "by all means - we'll be there!"

Israel's UN ambassador, Ron Prosor, wrote a letter of complaint about the Palestinian initiative to UN Secretary-General Ban Ki-moon and this year's president of the 193-nation General Assembly, Sam Kutesa of Uganda.

"For 70 years the United Nations has raised only flags of full member states," Prosor said, adding that the Palestinians never held a single round of consultations on their resolution. He called it "another cynical misuse of the UN by the Palestinian Authority."

Prosor's letter called the flag-raising effort a "blatant attempt to hijack the UN," adding, "As the gatekeeper of this institution, I call on you to reject this aggressive behavior."

"Once again the Palestinians prefer to score easy and meaningless points at the UN, simply because they can," he said. "It's time to unequivocally tell them: This is not the path to statehood, this is not the way for peace."

He also accused the Palestinians, who he said appear to already have enough votes for their resolution to pass, of misleading UN member states by pretending that it was a joint initiative with the Vatican.

Mansour said the Holy See had expressed support for the flag-raising idea in principle early last month. But last week, the Vatican's mission to the UN circulated a note among member states saying it was not co-sponsoring the draft and demanding that all references to it be cut from the draft.

Several days later, it issued a new statement reiterating that it did not object to the Palestinian draft resolution on flying non-member states' flags but without any reference to its earlier demand that it not be mentioned in the resolution. But the mission made clear it was satisfied with the status quo.

Prosor said the Vatican issued the second statement under pressure from the Palestinian and Arab delegations.

Mansour called Prosor's letter "full of distortion and fabrications" and said the matter is up to member states to decide.

The flags could be up quickly, Mansour said.

"We did our homework. We inspected everything needed. There are holes for additional poles. There are poles," he said. "Everything's ready to go."

Neither the Vatican's nor the Palestinians' UN missions had any response to queries about Prosor's letter.

In Washington, State Department spokesman Mark Toner said, "We continue to believe that Palestinian efforts to pursue statehood or endorsements of statehood claims through the UN system that are outside of a negotiated settlement, we believe those actions to be counterproductive."

A spokesman for the UN secretary-general, Stephane Dujarric, told reporters Tuesday that the UN will abide by whatever the General Assembly decides.