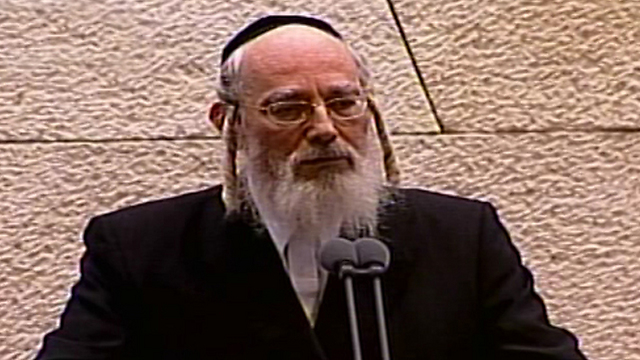 Haredi MK Eichler introduces amendment that bars journalists in Israel's public broadcasting to express their personal opinions on air, causing outrage among both politicians and the media.

A last minute amendment to the new public broadcasting law has sparked uproar in the political system, and particularly in the Israeli media.

The amendment, added at the request of MK Yisrael Eichler (United Torah Judaism) right before the bill went up to a vote, forbids journalists that work for the Israel Broadcast Authority (IBA) from expressing a personal opinion on air - in essence limiting their freedom of expression. The Knesset passed the law in second and third readings with a majority of 25 in favor and 18 against.

The new legislation determines that Israeli citizens will not be required to pay television license fees retroactively starting 2015 and onwards. It also determines that the IBA will be shut down in March 2016, and replaced with a new authority called "The Israeli Broadcast Corporation."

Moments before the vote in the early hours of Thursday morning, Eichler added an amendment to the legislation that instructs journalists working for the authority to avoid "one-sided coverage, prejudice, the expression of personal opinion, handing out grades and giving labels, concealing of facts or using selective intonation which is not in line with facts' newsworthiness." This amendment, which was passed with the new law, has enraged the IBA's journalists, who view it as an attempt to censor them. Eichler's amendment is in fact part of the Nakdi Document from 1972, which provides ethical guidelines for use in Israel's broadcasting industry. The document, written by Israeli journalist Nakdimon Rogel, was never officially adopted into law, and the fact it was written over 40 years ago did not stop the MKs from voting in favor of the amendment. Eichler, himself a former journalist, explained the reasoning behind his amendment: "Those who work in privately-owned commercial media bodies can decide who they would like to praise and who they hate, attack and vilify, as long as it doesn't cross into incitement and slander. A public servant, in any field, cannot be one-sided and cannot label entire publics, and certainly not in the media that has an influence over the masses, for better or for worse. Reporters that are paid with public money cannot offend any public. Those who want to lead personal campaigns and agendas could do so in the privately-owned commercial media and on their own expense."

United Torah Judaism MK Yisrael Eichler
Ofir Akunis, a minister in the Communication Ministry, added: "This legislation advances the establishment of the Israeli Broadcasting Corporation. Its broadcasts would give expression, in a balanced and pluralistic manner, to the variety of opinions, positions, and cultures in the Israeli society." Opposition leader Isaac Herzog, meanwhile, slammed the legislation. "Netanyahu and his government want to bring down the freedom of expression. It's inconvenient to them that journalists think and express their opinions, so they silence and trample and twist basic laws to that end. A democracy must allow its citizens and journalists to have complete freedom of expression," he said. Senior legal sources said it is not unlikely there will be petitions against the amendment, which on the surface violates the freedom of expression, to the Supreme Court. If that is the case, Attorney General Yehuda Weinstein will be required to provide his legal opinion. Weinstein, who considers one of his main roles to be protecting the freedom of expression, will hold consultations to examine the legality of the controversial amendment and to see whether it could be defended in court. Israel's Journalists' Association said the amendment was "a bizarre addition that hurts democracy and the very foundation of public broadcasting, and constitutes an unacceptable interference of the legislature in the matters of journalistic ethics. The amendment's passing was done in an unacceptable and superficial manner, while skirting around public discussion and in contempt of the Knesset and the Israeli democracy. The organization intends to act in any legal, legislative and public way to cancel this amendment to the law, and is currently examining turning to the Supreme Court.

"The expression of opinion is an important part of journalistic work, and part of the democratic role of all media is to provide a stage for opinions. It is inconceivable that an amendment so important and significant, which touches upon the very heart of journalistic work, is advanced without any public discussion and even without any discussion in the Knesset, in secret, because of ugly underhanded opportunism that disgraces the Knesset in particular and the Israeli democracy in general."

Meanwhile, Israeli political reporters from all across the political spectrum sent a letter of protest to Prime Minister Benjamin Netanyahu on Thursday, saying: "We believe that this amendment has caused severe harm to journalistic freedom in the IBA. This is not a matter of a specific political worldview, or the fight between left and right.

"We recognize the need for a pluralistic and open broadcasting authority, which allows a variety of opinions that express the different worldviews in the Israeli public. The expression of opinion - particularly when that opinion is often against the government's policies or the dominating public opinion - is the very soul of democracy."

Netanyahu's office said on Friday that the prime minister, who is also the minister of communications, "believes that the guidelines of journalistic ethics should not be determined in legislation, and decided to correct" the amendment to the new law.