There are some challenges that will test the Trudeau government’s resolve
Photo: Reuters 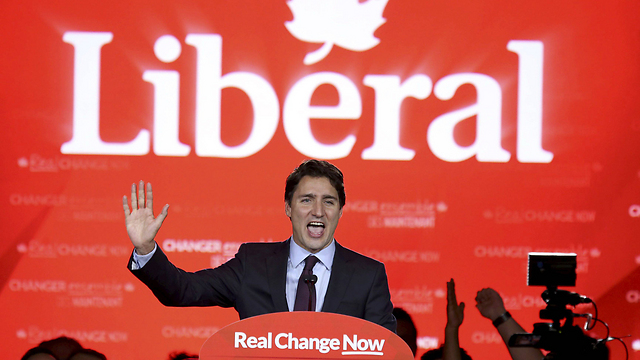 What does the future hold for the Canada-Israel friendship?

Analysis: Based on his statements of support and understanding of the challenges facing Israel, PM-designate Justin Trudeau is well positioned to carry the pro-Israel consensus forward. While the tone may change, there is ample evidence that support for Israel will remain a stable fixture of Canadian policy.

On October 19, Canadians elected a majority Liberal government, which will be led by Prime Minister-designate Justin Trudeau, the son of former Prime Minister Pierre Trudeau. Many Jewish Canadians, and members of the pro-Israel community around the world, are asking what the change in government means for Canada’s support for the Jewish state. To answer this question, one must first consider the unique factors that underpin Canadian support for Israel.

For a host of reasons, anti-Zionist sentiment – while present on the margins – has largely failed to permeate the mainstream in Canada. Canadians recognize that Israel is a country that shares our democratic tradition and core values.

Canadian governments, irrespective of partisan affiliation, have maintained positive relations with Israel for more than 60 years, including establishing free trade in 1997, Canada’s first such agreement outside North America. The connections between Canada and Israel transcend the political sector and are increasingly seen in academic, business, and technology partnerships between the two democracies.

Jews have called Canada home for more than 250 years. Canadian Jewry, the third largest community in the Diaspora, is well-established, well-accepted, politically diverse, and disproportionately active in the democratic process. Though support for Israel is a consensus point in the community, there is healthy debate on a range of other issues, policies, and party preferences.

In the recent election, a substantial segment of the community campaigned for the Conservatives. In addition to supporting the party platform, they cited the fact that Stephen Harper has been the most vocally pro-Israel Prime Minister Canada has known; noting that his support reflects a principled worldview that recognizes Israel as the sole democracy in a dangerous and radical region.

They are quick to provide examples in which Harper affirmed Israel’s right to defend its people, opposed anti-Israel resolutions at the UN, the G-8, and the Francophonie, and declared that Canada will always stand with Israel. Under Stephen Harper’s leadership, Canada has become one of Israel’s closest friends in the world.

At the same time, a significant element of the community volunteered and voted for the Liberal Party. Among numerous factors and policy issues that guided their choice, they note that Justin Trudeau is passionate and unequivocal in his support for Israel and has a keen appreciation of the democratic values we share with Israelis.

They add that he is genuine and vocal in his condemnation of those who demonize Israel, including activists who call for BDS, slander Israel, or exhibit other forms of what he has aptly described as the new anti-Semitism. This, they observe, speaks to moral clarity.

And still others in the Jewish community threw their support behind the New Democratic Party (NDP), a social democratic party led by Tom Mulcair. Jewish supporters of the NDP were encouraged by Mulcair’s vocal opposition to BDS and his warmth for Israel, which he has articulated repeatedly. Anti-Israel activists regularly fume at Mulcair’s 2008 comment that he is "an ardent supporter of Israel in all situations and all circumstances."

Jewish Canadians in all three parties have good reason to applaud the principled positions taken by their party leaders on Israel. Stephen Harper has set a new standard, not just for Canadian prime ministers, but for the international community – for which Canadian Jewry, regardless of individual politics, is grateful.

At the same time, based on his statements of support and his understanding of the challenges facing Israel, Prime Minister-designate Justin Trudeau is well positioned to carry the pro-Israel consensus forward. While the tone may change (every government has its own unique voice and style), there is ample evidence that support for Israel will remain a stable fixture of Canadian policy.

That said, there are challenges that will test the Trudeau government’s resolve. The Liberal caucus, in contrast to its Conservative counterpart, is less monolithic in its views on Israel and the Middle East. This could lead to internal pressure on the government to adopt a more neutral response to developments in the region. The Public Service will also play a role.

For the Trudeau government to ensure that Canada’s policy positions remain stable, Ministerial staff will have to be clear that departmental officials cannot act independently of their political masters and that policy flows from the government to the bureaucracy and not vice versa.

In upholding a principled, pro-Israel approach, Mr. Trudeau would be in keeping with a number of his Liberal predecessors. Prime Minister Lester Pearson, an icon of Canada’s diplomatic corps, was clear about the need for Israel’s neighbours to recognize the legitimacy of Zionism.

A prescient observation in Pearson’s 1972 memoirs rings true today: "I never had a doubt that this problem is unsolvable without recognizing a Jewish state in the Land of Israel. For me it was always the centre of the issue." The most recent Liberal prime minister, Paul Martin, changed Canada’s position on a number of crucial UN votes away from critical orientation toward Israel. Martin himself once observed that "Israel’s values are Canada’s values."

The Pearson-Martin approach to Israel should inspire Mr. Trudeau as he enters the Prime Minister’s Office and begins to engage the Jewish state. It should not be overlooked that, in the brief instance that the topic of Israel arose in an election debate on foreign policy, Justin Trudeau declared: "All three of us support Israel, and any Canadian government will."

This is encouraging for Canadian Jewry who look forward to working with Ottawa to enhance an already remarkable Canada-Israel relationship.

Shimon Koffler Fogel is the CEO of the Centre for Israel and Jewish Affairs (CIJA).