Rabin. Had the courage to present an alternative and fight with half the nation
Photo: EPA 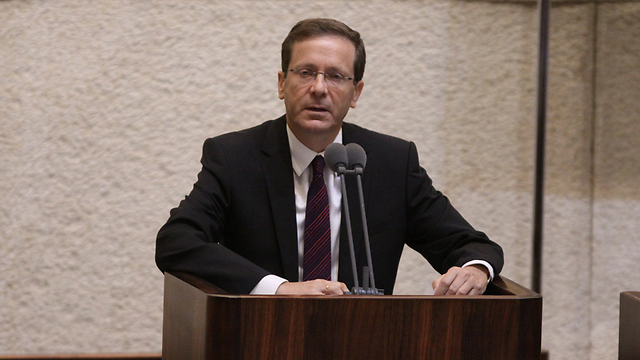 A legacy without a successor

Op-ed: Israel's opposition, and most Likud and Bayit Yehudi members, are unsuccessfully searching for Rabin's courage. Few are the politicians who dare to talk about what they really want to do, in any area.

Let's put aside the trauma of a prime minister's murder in the State of Israel, the crazy political discourse that took place here 20 years ago, the incitement, the radicalization, the self-examination and the rift which almost tore the third temple in two. If we put aside the emotions, we are left with the practical question: What did Yitzhak Rabin want to do? What could have changed in the Middle Eastern reality?

Twenty years later, my conclusion is: Not much. With all the goodwill, then-Palestinian Authority Chairman Yasser Arafat was incapable of creating a peace agreement with the Jewish state. He did not plan to end the conflict and to give up the refugees' ambitions and the huge payment mechanisms from the United Nations agencies. He did not want to educate to peace and tolerance. Arafat remained Arafat: The terrorist who knew how to hate and, for lack of any other option, to disguise himself and bargain for the sake of bargaining.

So what is the Rabin legacy and, to be more exact, what was his practice? The most reasonable answer is the courage to go in the direction he mistakenly thought was the right one. The courage to present an alternative to the majority's perception. The courage to fight with half the nation.

One of the most impressive sections in Rabin's biography as prime minister was the Nachshon Wachsman rescue operation. The operation failed miserably: Wachsman and the force's commander, Nir Poraz, were killed. At the end of the operation, Rabin stood up and said: It's my responsibility, my failure. I can't remember any other prime minister who ever used those words.

Opposition Chairman Herzog. If there is no Oslo-style peace and no peace agreement (which he will pursue again and again, as he declares), what is he suggesting? (Photo: Knesset spokesperson)

The comparison to the present is stronger than any explanation: Only the other day, in the midst of the storm, Opposition Chairman Isaac Herzog tweeted about the Israeli "rely on me" culture and the collapsing infrastructures. Couldn’t they have prepared? He asked. How is it possible that this country is surprised by winter every year?

These are good questions, which can be asked every winter, and they are questions which illustrate the opposition's weakness more than anything. Herzog is not presenting an alternative to Prime Minister Benjamin Netanyahu. He wouldn't have dealt with the rain and the hail any differently, nor with the Israel Electric Corporation's workers, or with security and peace.

Some blame Herzog's pleasant character and lack of security-related charisma for not turning him into Rabin's successor. They are wrong. The main thing he is lacking is the courage to say what he would like to do in the area Rabin adopted in his last days. In the area which I believed he was wrong about, until he was murdered by a vile person. If there is no Oslo-style peace and no peace agreement (which he will pursue again and again, as he declares), what is he suggesting?

From Herzog, we can move on to the person who has become the actual opposition leader, Yair Lapid. In terms of political skills and charisma, Lapid and Netanyahu are playing on a different field from the rest of the players. They understand the public opinion, understand about mass media and don't hesitate when facing criticism.

Lapid even has a certain advantage over Netanyahu: He is a man of people. His emotional intelligence is developed, he knows how to drink beer with friends, and whoever doesn’t understand how important that is doesn’t understand a thing about motivating people.

Nonetheless, his practice is lacking. He hasn't said courageously what he wants either. What happens tomorrow morning if the Saudi initiative (an euphemistic version of the Clinton Parameters), which he has chosen as his banner, cannot really be achieved? What if there is no such thing as a local/regional agreement?

And finally, the coalition, where the Rabin legacy has also been studied very well: Be brave, pick a direction - and lose. Take, for example, journalist Amit Segal's report on the idea to revoke residency from the five neighborhoods located outside the fence in Jerusalem, and the quick denials which followed. There are few politicians who don't recognize a reality in which there is a black hole - an ex-territory in Jerusalem. Few are those who dare to talk about what they really want to do there.