The drunken man accosting the worshippers 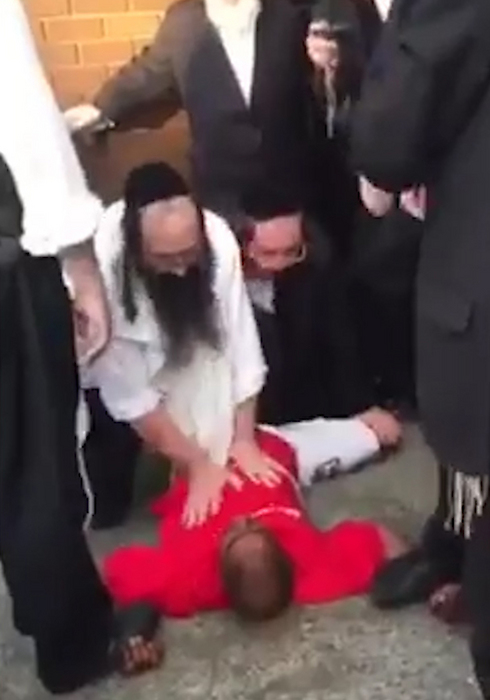 Jews attacked in Australia: 'Go back to Israel'

WATCH: Group of worshippers assaulted outside synagogue in Melbourne by an intoxicated man who hurls insults at them, tries to beat one of them.

A group of ultra-Orthodox worshippers was attacked outside of their synagogue in Melbourne, Australia on Thursday by an intoxicated man who slung insults at the group, and attempted to beat one of them.

The incident was captured on camera, and seemed to show the worshippers taking control of the situation, and subduing the attacker by holding him to the ground until police arrived.

The incident took place outside of the Adat Israel synagogue in Melbourne, and started when the intoxicated man walked up to the group of worshippers who were standing outside of the temple and began hurling insults at the men, saying "Go back to Israel," and asking, "Do you want to pray to Allah?"

After the short exchange, the man attacked one of the worshipers, grabbing his shirt.

Worshippers subdue drunken man
The target of the drunken man's attack reacted quickly, and managed to subdue the assailant to the ground. The attacker continued to struggle and fight until he finally surrendered. The group of worshippers joined in and made sure the man did not escape before police arrived.

According to local police, the attacker, 39, clashed with the worshippers after they apparently caught him stealing a child's scooter in front of the building. He was arrested and charged with theft, assault, and damaging property.

In another video of the incident, the attacker is seen yelling at one of the worshippers. The worshipper then asks the man to "speak nicely," but the man responds by slapping the worshiper in the face.