Payam Feili, who fled Iran after being persecuted for being gay and is now in Israel 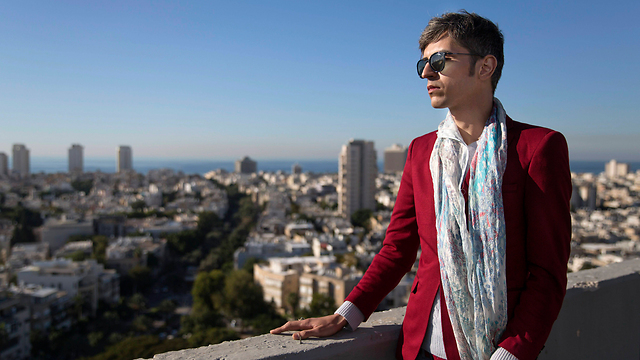 Payam Feili, who fled his native Iran last year after being persecuted for being gay, now finds himself in Israel - a country he says has fascinated him since childhood.

Payam Feili fled his native Iran last year because of the persecution he faced over his sexuality. Now, the gay poet has made a years-long dream come true — he is visiting Israel, Iran's archenemy and a country known for its tolerance toward gays.

But the 30-year-old Feili stands out not only because of his arrival in a country so at odds with his own, but because of his professed adoration for the state some Iranian leaders have dubbed a cancer and have called to be wiped off the map.

"I still can't believe I am here," the soft-spoken Feili said in Farsi, speaking through his translator and the friend who brought him to Israel, Adi Liberman.

Feili, who has written nine books, many of them openly discussing homosexuality, escaped to Turkey last year when the Iranian government's threats against him and his family became unbearable.

He is in Israel to see his latest novella, "I Will Grow, I Will Bear Fruit ... Figs," staged as a play in Hebrew in a Tel Aviv theater. While his always supportive family remains in Iran, he said he hopes to stay in Israel permanently.

Feili has nurtured a fascination with Israel since he was a youngster, when he began watching films about the Holocaust and started learning about the Torah. He has a coin-sized Star of David tattoo on his neck.

"I grew closer and closer to Israel and I fell in love with it," he said.

Feili has a small Star of David tattoo on his neck (Photo: AP)

While Israel and Iran once had close economic and cultural ties, those links crumbled after the 1979 Islamic Revolution, and relations since then have grown increasingly hostile. The two countries have no diplomatic ties and it is illegal for citizens of each country to visit the other, although Israel makes exceptions under certain circumstances.

Standing on the roof of Tel Aviv's city hall with gleaming skyscrapers and the city's signature Bauhaus buildings behind him, Feili brandished his Iranian passport, which declares "the holder of this passport is not entitled to travel to the occupied Palestine."

She said he was finally granted a three-month visa, but that he has begun a process to remain in Israel permanently on humanitarian grounds.

Feili's novella, which is being produced in Israel by Ido Dagan, portrays the unrequited love of two Iranian soldiers fighting in the Iran-Iraq war of the 1980s. Dagan said Feili is the first Iranian he has ever met.

"There are differences, big differences in terms of worldview, values, language and our background, but we connected because of his desire to taste freedom," Dagan said. He said Feili's Israeli friends have already come up with a nickname for him: Queen of Israel, a character from his latest book.

Feili said he was surprised by how boisterous Israelis can be and how much they honk their car horns, which reminded him of his Iranians.

Sporting dark shades, a white scarf and a large indigo ring, he appeared to feel at home in Tel Aviv as he confidently walked through the city center, greeting passers-by.

Israel's economic and cultural hub, Tel Aviv is a popular gay-friendly destination. Israel accepts gays serving openly in its military, but homosexuality is shunned among the country's conservative ultra-Orthodox community. This year, an extremist ultra-Orthodox Jew stabbed a 15-year-old girl to death at a Jerusalem Pride parade.

Homosexuality is a taboo topic in Iran, where gays and lesbians can face lashings or death sentences if convicted. Human rights groups estimate that over 4,000 gays have been executed since the Islamic Revolution. Famously, former Iranian President Mahmoud Ahmadinejad told a crowd at New York's Columbia University in 2007 that "in Iran, we don't have homosexuals like in your country."

Feili was reluctant to talk about the threats against him back home, but said they began after the publication in Iran of a heavily censored version of his first book, a collection of poetry titled "The Sun's Platform," in 2005. Feili was blacklisted and has been banned from publishing in Iran since.

According to the PEN American Center, a writers' group advocating for freedom of expression, Feili's email account was hacked and he was locked out of his online blog.

He was arrested three times over four years, most recently in February 2014 after he agreed to have his work published in Hebrew in Israel, according to PEN. The group said he was held blindfolded in a shipping container at an unknown location for 44 days, without being charged.

Feili declined to discuss the details of the arrests but said his family, in the Iranian city of Karaj, is still being harassed.

Suzanne Nossel, the executive director of PEN, called Feili a "very courageous individual being hounded by his government because of his identity." She said Iran's treatment toward the poet was "a core crime against expression."

But Feili refuses to be cowed.

"I am not going to stop living my life or change something about my life because the regime threatens me or my family," he said. "Even when I lived in Iran under an execution order, I continued living my life as I wanted to and nothing will affect that."