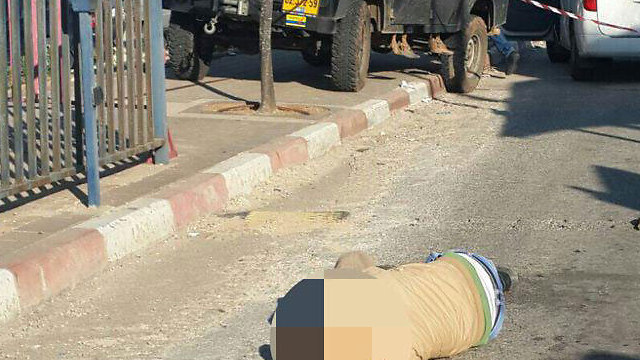 Male and female guards at industrial area near West Bank settlement shoot and kill terrorist after he stabs and moderately wounds them.

Five Israelis, three of them soldiers, were light-to-moderately wounded in attacks in the West Bank on Thursday.

A Palestinian attacker - identified as Muhammad Zahran, 22, from Kafr Ad Dik - arrived at the gate of an industrial area near the West Bank settlement of Ariel shortly after 9am, where he attacked two security guards with a knife. One of the security guards shot and killed Zahran.

Scene of the terror attack near Ariel

The wounded guards, a man and a woman in their mid-20s, were evacuated to the Beilinson Hospital at the Rabin Medical Center in Petah Tikva in moderate and light condition, respectively.

The terrorist after he was shot and neutralized (Photo: Hatzalah)

At the Ari Junction (also known as Kvasim Junction) near Hebron, a Palestinian attacker - identified as Eiad Jamal Issa Ideis, 25, from Yatta - tried to stab troops checking Palestinian cars with a screwdriver, but he was shot dead before he could hurt anyone.

Shortly before noon, a Palestinian rammed his car into a solider near Geva Binyamin, not far from the Qalandiya. The soldier was very lightly wounded and did not require evacuation to hospital. The attacker - identified as Wisam Abu Ghwaila, 22, from Qalandiya - was shot dead by troops at the scene.

Scene of the attack near Geva Binyamin    (צילום : TPS)
X

Scene of the attack near Geva Binyamin

An elite Duvdevan force that entered the Qalandiya refugee camp near Jerusalem for an arrest raid on Thursday came under fire from a Palestinian attacker. The force returned fire, and the military is examining the Palestinian claim that the shooter was killed. While at the refugee camp, the troops were met with a crowd of rioters who hurled large rocks, Molotv cocktails, explosives and burning tires at them. The fighters shot a Palestinian man who threw a suspicious object at them, which they suspected was an explosive device. Two of the soldiers were lightly hurt, but the troops were able to leave the camp with the two Palestinian suspected of committing recent terror attacks who are wanted by the Shin Bet

Tuesday marked 100 days since the murder of Alexander Levlovich in a stone-throwing attack on Rosh HaShana eve in Jerusalem. Levlovich's death is considered the opening shot to the current wave of murderous terror attacks.

Since the beginning of this wave of violence, 24 Israelis had been murdered, and 259 wounded - 24 of them seriously, seven moderately-to-seriously, 36 moderately, 11 lightly-to-moderately and 18 lightly wounded.