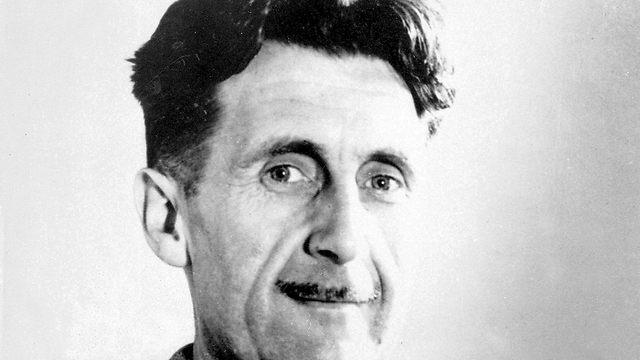 The perils of self-censorship

Op-ed: A new play of Orwell's 'Animal Farm' implicitly critiques Israeli society, and may trigger use of the 'loyalty law'; in our day, few people espouse that "all are equal, and the pigs are no longer Communist tyrants but capitalists who scurry away their wealth in tax refuges.

The Gesher Theater does not earn enough at the box office and from its meager public funding. Like most artistic institutions, it also needs the support of wealthy art lovers. On that night the performance was intended for distinguished guests.

The actors who presented "Animal Farm" are alumni of theater school that Gesher adopted as a promising junior varsity team. The play was adapted from George Orwell's famous book, a satire on the Communist regime in the Soviet Union.

Farm animals rebel against the farm owners and establish a worker's democratic republic. The republic's constitution is based on strict principles of social justice and peace, but the pigs quickly take control over the other animals, exploit them, kill them and dumb them down with demagoguery based on class status and nationalism.

Orwell wrote the book during the Second World War, and was already then waking up from his mild admiration of the USSR. Since then, the parable has been worn out from overuse. Even the most well known sentence in the book has become stale: "All animals are equal, but some animals are more equal than others." In our days, few people espouse that "all are equal, and the pigs are no longer Communist tyrants but capitalists who scurry away their wealth in tax refuges.

In order to bring new life to the parable, the play has been adorned with music and rhymes, and in the Hebrew version a few clues were slipped in whose job is to remind that the parable's time has not passed. Two stanzas from "Hatikvah", Israel's national anthem, cap a demagogic speech, and a sentence from the eulogy of poet Natan Yonatan – "Where are more people like that man" – is inserted into the text that mocks the death of one of the animals.

There is more. I did not care for the pandering towards the wealthy and educated audience that tends to be part of an irritated Left. The Israeli theater has already delivered heavy blows to Israeli society, while the creators of the version shown at Gesher seemed like children testing their parents' patience.

But who knows how to predict the minister of culture's reaction? If her lungs are filled with a fighting spirit, she might interpret the nudges that were hinted in "Animal Farm" as literal. The following sentence might be surmised: "Israel is a murderous dictatorship, its leadership behaves like pigs and those who have fallen in combat were made stupid by perverse slogans".

It seems that would be enough to implement the "Nakba Law", also known as the "Loyalty Law", and fine one of two of the best theaters in Israel. If that happens, there is no doubt that "Animal Farm" will be a hit, just like "Borderlife", Dorit Rabinyan's innocent book, became a bestseller thanks to a stupid remark by the Ministry of Education.

I looked into the fate of Orwell's book in the days that the UK fought alongside the USSR against Nazi Germany. Four publishers refused to take it on. The author received hints that comparing the Soviet ruling elite to a group of pigs might greatly hurt that sensitive ally, and that it would be best if the animals standing in for Communist tyrants were less disgusting. As a result, "Animal Farm" only appeared in 1945, when the Second World War was approaching its conclusion.

An introduction by the author was added in 1972, in which he justifies wartime censorship for security reasons, praises the British government's restraint and warns against voluntary censorship. One should not hang hopes on the press, Orwell writes, since it will not oppose the regime, since its owners work according to its economic interests. Regarding the editors of journals and the publishers, filmmakers and radio persons – these tend to censor themselves willingly, because they adapt themselves to prevalent attitudes at large.

Orwell's warning is valid even today: It is not the regime that endangers the freedom of artistic expression, but rather the slow surrender public opinion that this administration loyally represents.