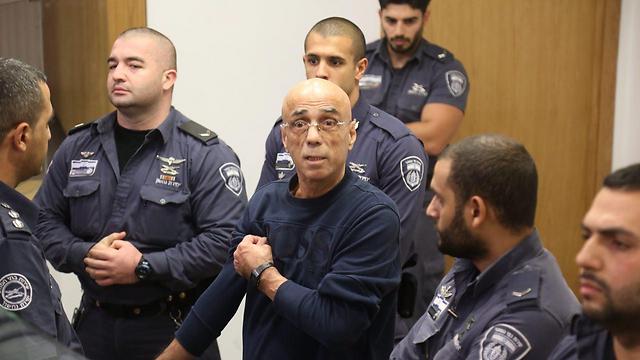 Under heavy security, the Tel Aviv District Court sentenced Israeli mob boss Eitan Haya to 20 years in prison for a long list of crimes including illegal use of weapons, extortion, intimidation, money laundering, and tax evasion. Judge Zvi Gurfinkel, who will retire after the completion of this case, wrote that Haya is a man "Who acquired a reputation of carrying out homocides and other crimes. He also surrounded himself with many people and committed extortion and money laundering, which entailed opening fire on someone and throwing a grenade."

For money laundering and tax evasion, Judge Gurfinkel sentenced Haya to three years in prison and fined him NIS 1 million. For assaulting a state witness, he received three months in prison. For breaking and entering, he was sentenced to three more months. For another count of extortion, he received two years. For a third count of extortion, he was sentenced to five years. For two incidents of throwing grenades, he earned an additional 10 years, giving him a total of 20 years in prison.

Judge Gurfinkel quoted Mario Puzo's The Godfather in his ruling. He said, "In Mario Puzo's well-known book, The Godfather, there is description of rape. The father of the raped girl relies on a court (for justice), but the court ultimately acquits the rapists. So the father, Bonasera, turns to Don Corleone, who then sends people to break the rapists' legs. Bonasera owes his life to the Godfather." At the beginning of December, Haya was convicted of money laundering, extortion and intimidation, who have high interest loans. The conviction included three counts of extortion through intimidation, using grenades and conspiring to commit a crime and three counts of money laundering and tax evasion.

Haya left Israel in 1981 and returned in 2004, and has since been living in the luxury "W" building in Tel Aviv. An indictment was issued against him and his accomplices after an investigation by the Central District Police, which described the terror that he caused for his debtors and the violent tactics, including physical attacks, employed in collecting debts.

He also allegedly has concealed much of his financial activity from law enforcement. He has not disclosed the source of his income or opened a bank account in his name. He carried out business transactions, hiding his identity and acquired funds through the bank accounts of others. Only in 2010 did he report that he had a net wealth of NIS 15 million.