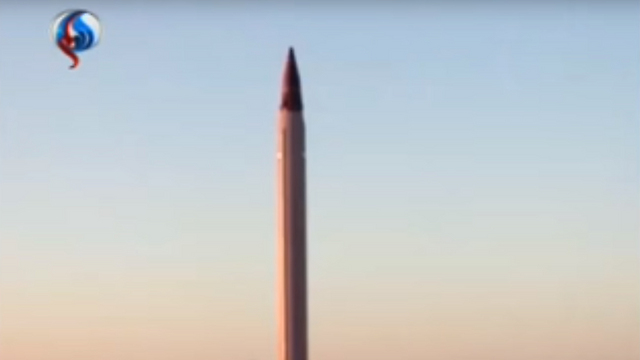 In defiance of the international community, Iran claims that it launched several ballistic missiles from silos across the country. According to Iranian reports, missiles hit targets 700km from launch point.

However, the White House stressed that the test did not violate the nuclear agreement Tehran signed with world powers. The US State Department says it is aware of the launches and is closely following reports.

White House spokesman Josh Earnest said the Obama administration was still reviewing whether it would be necessary to raise the issue of the tests before the United Nations Security Council.

The test happened two months after the United States sanctioned businesses and individuals linked to Iran's missile program over a test of the medium-range Emad missile carried out in October 2015.

Iranian Imad Missile
Brigadier General Amir Ali Hajizadeh, commander of the IRGC's aerospace arm, said sanctions would not stop Iran developing its ballistic missiles, which it regards as a cornerstone of its conventional deterrent.

"Our main enemies are imposing new sanctions on Iran to weaken our missile capabilities… But they should know that the children of the Iranian nation in the Revolutionary Guards and other armed forces refuse to bow to their excessive demands," the IRGC's website quoted Hajizadeh as saying.

State television showed a missile being fired from a fortified underground silo at night time. The presenter said it was a medium-range Qiam-1 missile, and the test took place in the early hours of Tuesday.

"The missiles struck a target 700 km away," Hajizadeh said.

State-run Press TV showed footage of the Emad missile, Iran's most advanced model under development, being fired. However, that footage appeared to be from the October launch which triggered the US sanctions.

The UN said the October test, which took place after Iran reached a nuclear deal with world powers in July, violated Security Council Resolution 1929 which barred Iran from undertaking any work on nuclear-capable ballistic missiles.

That resolution expired when the nuclear deal was implemented in January, but a new resolution then came into force under which Iran is "called upon" not to undertake any work on missiles "designed to" deliver nuclear weapons.

Iran always denied any link between its ballistic missiles and its disputed nuclear program, which is now subject to strict limitations and checks under the nuclear deal that came into force in January.

Tuesday's test was intended "to show Iran's deterrent power and also the Islamic Republic's ability to confront any threat against the (Islamic) Revolution, the state and the sovereignty of the country", the IRGC's official website said,

While any missile of a certain size could in theory be used to carry a nuclear warhead, Iran says the Emad and other missiles are for use as a conventional deterrent. Recent work has focused on improving the missiles' accuracy, which experts say will make them more effective with conventional warheads.