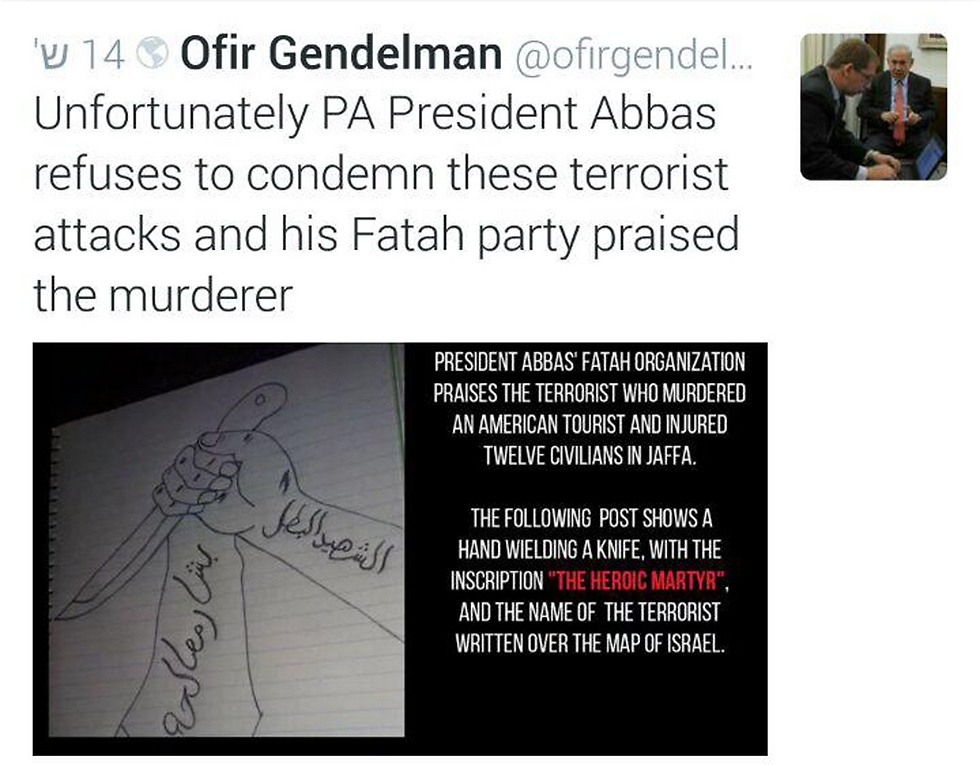 Ofir Gendelman, the Arabic-language spokesman of the Prime Minister’s Office, tweeted a drawing from Fatah's account glorifying the Jaffa terrorist.

A Twitter battle erupted on Wednesday night between Ofir Gendelman, the Arabic-language spokesman of the Prime Minister’s Office, and the operators of Fatah's official Twitter account.

Gendelman on Wednesday published a screenshot of a drawing posted on Fatah's feed that included text glorifying Bashar Masalha, the terrorist who carried out the stabbing attack in Jaffa last Tuesday.

The drawing depicts a hand holding a knife over a map of Israel with the writing "Bashar Masalha, heroic martyr". Gendelman tweeted that "President Abbas's Fatah organization praises a terrorist who murdered an American tourist and injured 11 civilians in Jaffa."

Fatah fought back by tweeting back: "When you and your failing government end your occupation of the Palestinian state, the violence will end and peace will come. This is the solution that is before you."

The Fatah account also tweeted that Palestinian actions are acts of self-defense for the sake of dignity, freedom and an end to occupation. The tweets demanded that Gendelman and the IDF leave Palestinian land.

A few minutes later, Fatah posted a combative tweet stating: "If you do accept the two-state solution and ending the occupation – the young people's resistance will continue. We have no other option."

The authors of this tweet added the drawing that Gendelman originally posted.