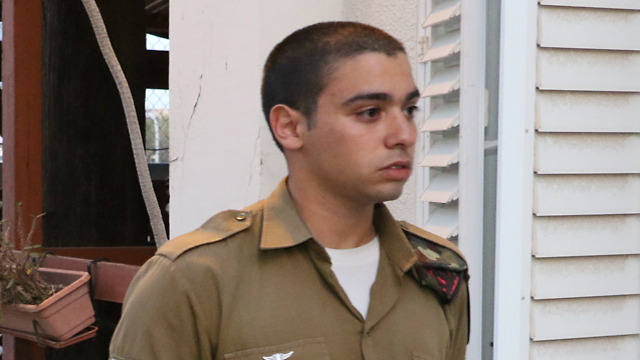 Sergeant Elor Azaria, who shot neutralized terrorist, indicted after he was found to be acting 'in contradiction with the rules of engagement and without operational justification.'

Sergeant Elor Azaria, 20, from Ramla, the Kfir Brigade soldier who shot dead an already-neutralized terrorist in Hebron, was charged with manslaughter at the Jaffa Military Court on Monday. He was also charged with inappropriate behavior.

The Jaffa Military Court accepted the defense's request to lift the gag order on the soldier's name.

While determining that Azaria will stay in detention at the Nachshonim military base near Rosh HaAyin until the conclusion of legal proceedures against him, Judge Lt.-Col. Ronen Shor accepted another request by the defense to allow Azaria to spend Seder night with his family at home.

"The soldier took several steps towards the terrorists, aimed at his head and fired a single bullet from short range. This the defendant did in contravention of the rules of engagement and without operational justification," the indictment said.

The judge criticized both the prosecution and the defense, and warned that the evidence in the case was weak. "The level of criminality of the defendant might be lower than what the prosecution attributes him," Judge Shor said.

Prosecutor Lt.-Col. Adoram Rigler said at the court hearing that "the terrorist who was shot by the soldier did not pose a risk to him or to anyone around him. There is a strong evidentiary basis to prove the indictment."

Attorney Ilan Katz, representing the soldier, further stated, "Company Commander NT testified to the Military Police, saying, 'I stood there for 7-8 minutes before the shooting, and noticed about 20 seconds before the shooting that the terrorist was moving.' Which explains the carelessness of the other people around."

Attorney Ben Malka, who also represents the soldier, said that "the decision mentions the fact there are many versions in support of the soldier. The prosecution's evidence is weak and this led, to begin with, to detention at the base. This is a manslaughter case and might turn out to be less. The indictment is not the end of it, just the opening note, and the truth will come out."

Scene of the shooting (Photo: AFP)

Azaria enlisted in the army a year and eight months ago and became a combat soldier in the Shimshon Battalion of the Kfir Brigade. After successfully finishing a combat medics course, he began serving as a medic in his company.

Azaria has no criminal or disciplinary record. On the contrary, before the incident, he recently received a certificate of excellence for his service.

His father served in the police for 30 years. In recent years, the father has been doing volunteer work, helping soldiers to expunge their criminal record.

Investigators did not find any indication that Azaria supports or has been involved with radical right wing groups. However, in posts he made on Facebook before beginning his army service, he expressed support for the revenge of the kidnapping and murder of the three Israeli teenagers.