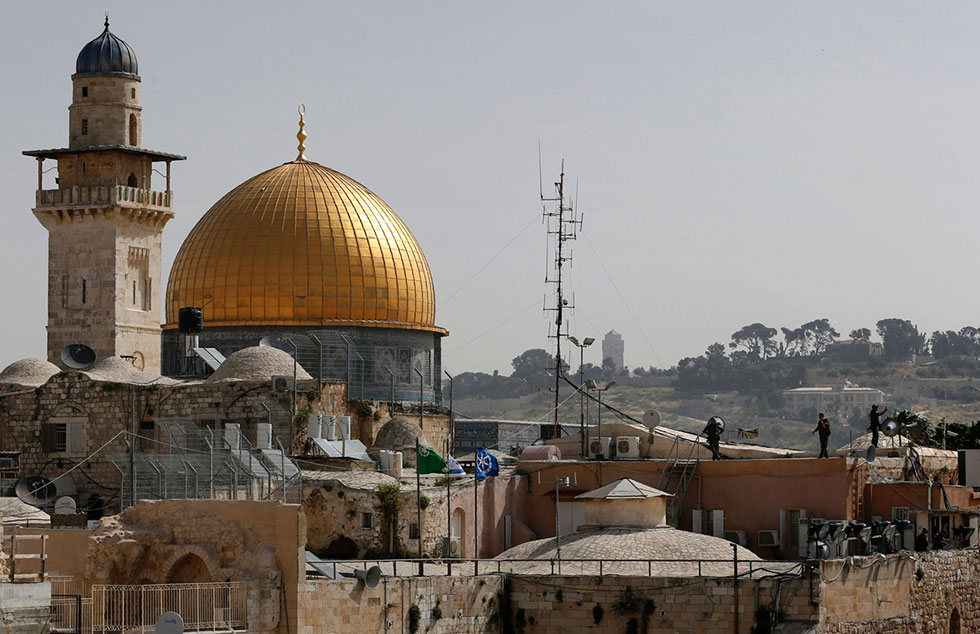 Op-ed: In place of a written constitution, Israel has its security interests. As a result, shifting security concerns dictate varying courses of actions rather than a set, predictable system of values.

Since Israel declared its independence, the only constitution it has had has been the security constitution. In its 68 years, the country hasn't found a single prime minister, from David Ben-Gurion to Benjamin Netanyahu, who would leave behind a set of rules and basic values to determine Israel's fundamental character. Even the Declaration of Independence would have difficulty getting passed by the different factions of today's Knesset. The Basic Laws, which were meant to stand in for the constitution, haven't been passing in recent years—the good or the bad—and so, Israeli judges and attorneys general are left to do what's right in their eyes, and security becomes our one divine goal.

The Temple Mount. Those with power rule the day. (Photo: AFP)
Everyone agrees on security, after all. All that's left is to interpret what that means. Through this lens, one can understand the way Palestinian family reunification is treated: Without a Basic Law that declares Israel a Jewish state, or some other definition clarifying the matter, the state's refusal to allow Palestinian families to reunite with their family members in Israel is explained by security concerns. One can further understand the continued construction in the West Bank, the limits placed on freedom of expression, and the chaos at the Temple Mount.

Our non-existent constitution allows for freedom of religion. It's our pride and joy. The only country in the Middle East that allows freedom for Jews, Christians, and Muslims of all sects. The Women of the Wall are allowed to bless whomever they want and as much as they want, and if it causes a controversy, a solution will be found.

Jews who want to pray, marry, or bless others on the Temple Mount are similarly treated. According to this imagined constitution, in every territory under our control, everyone has the right to pray for whatever they want and in any way they want, and anyone who doesn't like can leave. There's a constitution, and it allows freedom of worship and, alongside it, freedom of expression and other civil rights established by by the founders. A kind of year-long holiday of freedom. (Passover is also known in Hebrew as "the holiday of freedom" —ed.)

The Western Wall women. Controversial, but within their rights. (Photo: AFP)
I've been following the Temple Mount loyalists for the past few years. Some, in my view, suffer from Jerusalem syndrome: They are rendered unhinged by the city, traditions, legends and stories, and some of them probably hear voices. Others, such as Yehuda Glick, actually speak logically and symbolize hope for a less violent reality. Why they are focused on the Temple Mount is less important right now. Their story is a debate of constitutional rights.

The Temple Mount loyalists, like the Women of the Wall, are challenging the state of Israel where it's weak. They're causing pain to its phantom appendage. In the absence of a constitution, it's not possible to separate the demands of the Temple Mount loyalists to pray at the holiest site in Judaism from the demands of the Women of the Wall to bless at the Wall; from the demands of Reform Jews to allow all people to enter public mikvehs (Jewish ritual baths), or from the liberal Orthodox demand to set up conversion and kosher authority bodies free of the monopoly currently held by ultra-Orthodox leaders.

And when this is what's been in place from the state's founding to this day—the powerful win. Those who threaten more and cause more damage determine policy. The crazy man in the building dictates what happens, even if he's not the landlord. There's no status quo for those who refrain from threats and avoid causing danger. That is, the Jews.

From Ben-Gurion on, no prime minister has established a written constitution. (Photo: Fritz Cohen, GPO)
Let's return to the example ofthe Women of the Wall . I'm for religious feminist women. A female priestly blessing is something uncommon in any synagogue in the Jewish world, and still, it's their right to perform it. That's why they were allowed to perform the ceremony despite the anger of the ultra-Orthodox.

Now imagine if they were a group of Muslim feminists, Israeli citizens, who wanted to act as muezzins (those who call the faithful to prayer) at the Temple Mount. Is there any doubt about the results of such an initiative? When it's freedom of worship for the Arabs, the unwritten security constitution says that it's preferable to do nothing. There's no logic, no freedom of religion; there's just potential damage.

I understand the security reasons for preventing Jewish prayers on the Temple Mount, even when it slips into the realms of the absurd. What should worry Israelis is that, unlike a constitution, these security reasons change. Security is important, but it's no replacement for paving a way forward.