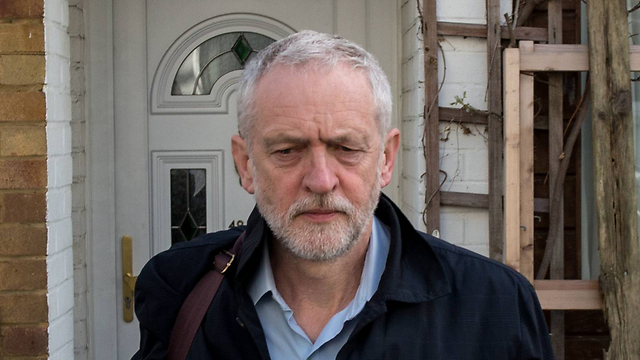 MP Diane Abbott claims 'it is a smear to say that the Labour Party has a problem with anti-Semitism,' while union leader Len McCluskey says controversy is being exploited by Labour's rivals ahead of elections.

LONDON — Senior officials in the British Labour Party are fighting back against charges there is anti-Semitism in the party's ranks ahead of Thursday's vote for a new mayor of London and other posts.

Labour legislator Diane Abbott said Sunday the party is being unfairly attacked by its political enemies while union leader Len McCluskey said the controversy is being exploited by Labour's rivals.

British Labour Party leader Jeremy Corbyn (Photo: GettyImages)
Abbott, who helps set the party's international development policies, spoke on the BBC's widely viewed Andrew Marr talk show as the debate over Labour's attitudes dominated political news in the final days of electioneering. The airwaves were filled with commentators debating whether the frequent criticism of Israeli government policies from Labour members had crossed over into anti-Semitism.

The issue flared up in the last week when Labour legislator Naz Shah was suspended for posting anti-Israel material before she was elected to Parliament. That prompted former London Mayor Ken Livingstone to defend her by saying that Nazi leader Adolf Hitler had been a Zionist early in his political career.

Livingstone was quickly suspended from his role on the party's executive council, but his provocative comments led Labour party leader Jeremy Corbyn to set up an independent review of anti-Semitism and other racism within the party, which was soundly defeated in last year's general election by Prime Minister David Cameron's Conservatives.

Labour Party mayoral candidate Sadiq Khan, who is leading in pre-election polls, said the comments have made his path to victory tougher.

"I accept that the comments that Ken Livingstone has made make it more difficult for Londoners of Jewish faith to feel that the Labour party is a place for them," he told The Observer newspaper.

The party was also criticized because of Corbyn's past links to Interpal, a controversial British charity said by US officials to be backing extremist causes.

In April, Interpal helped sponsor a festival in Gaza in which students presented a skit that showed a young Palestinian pretending to stab two Israeli soldiers.

Corbyn's office released a statement Sunday defending his involvement with the group, which he said was recognized by the UN Relief Agency and the British Charities Commission.

The statement said Corbyn has supported Interpal's humanitarian work and in 2013 toured Gaza on an "Interpal backed" humanitarian trip that included a Conservative and a Liberal Democrat legislator.

Corbyn himself has been avoiding the media's questions about the issue, and a video of him trying to dodge reporters went viral in the United Kingdom. The video shows a Sky News reporter asking Corbyn about the anti-Semitism scandal in his party. Corbyn doesn't respond, and tries to enter a building - but is unable to open the door.

Meanwhile, in an interview with the BBC, Israel's ambassador to London, Mark Regev, called for Corbyn to distance himself from Hamas.

"The left has a wonderful, proud history of fighting anti-Semitism, but we have seen some language over the last two or three weeks which is very concerning," Regev said.

"They have the right to criticize the Israeli government, Israeli citizens do it every day," Regev noted. "It is not about criticizing this or that Israeli policy, it is about the demonizing and vilification of my country and its very right to exist."

Regev lamented that "too many peope of the progressive side of politics who have embraced Hamas and Hezbollah," both of which he said are anti-Semitic organizations.

"If you are progressive, you are embracing an organization which is homophobic, which is misogynistic and which is openly anti-Semitic – what is progressive about that? There needs to be an unequivocal message from the leadership saying there is no solidarity with anti-Semites," Regev concluded.

"This data should alarm those responsible for enforcing the law: they are failing British Jews badly," said Gideon Falter, the chairman of the Campaign Against anti-Semitism which issued the report.