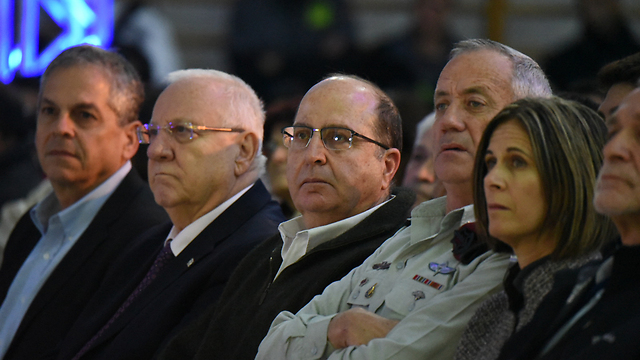 Israeli politicians and the US respond to Ya'alon's resignation; one MK: 'We’ve lost a sane and sound voice within the insane and dangerous current right-wing government'

Following Moshe "Bogie" Ya'alon's dramatic resignation from his position as minister of defense and a parliamentarian, polticians from a variety of parties spoke to his qualities, despite some disagreements. The US government also wished him well.

President Reuven Rivlin gave his own statement following the announcement, saying, “I am greatly saddened by the resignation of Lt. Gen. (res.) Moshe Ya'alon. Against the background of recent events, the break from political life he is taking is understandable, and even appropriate, but at the same time represents a great loss to us all. Bogie is a practical, professional leader; brave, modest, considerate and responsible for the sake of the security of the State for decades. I am hopeful that he will restore his energy, and soon return to serve the people and the country."

Maj. Gen. (res.) Amos Yadlin, head of the Institute for National Security Studies spoke to Ya'alon's defense service: "Bogie acted according to his conscience and took a principled and necessary decision. The personal and public norms that he showed for all the years of his service to the state are an important ethical example for the Israeli public. Ya'alon led the defense establishment with courage, composure and discretion in a complex environment and in a trying time. The Israeli public knows and appreciates this…I am convinced that reserve Lt. Gen. Ya'alon will continue to contribute to the national security of the State of Israel."

Following Ya’alon’s announcement, MK Tzipi Livni (Zionist Union) stated that “I disagreed with the minister of defense’s positions on security, but I appreciated and continue to appreciate his opinions and ethics, ethics that the current government lacks.”

Gila Gamliel
Social Equality Minister Gila Gamliel (Likud) responded by saying, “Ya’alon’s departure is a great loss to the National Union in general and specifically to the Likud.” She added, “I have no doubt that if Ya’alon’s treatment wasn’t so disparaging, his resignation could have been avoided.”

Aryeh Deri (Photo: Ohad Zwigenberg)
Minister of Internal Affairs Aryeh Deri (Shas) also praised the resigning minister, saying that “Over the several years, Ya’alon has very successfully acted as minister of defense, with integrity and loyalty.” He added, “Ya’alon is an ethical man who has dedicated decades of his life to the security of Israel. I call on him to recant and return to the government.”

HaBayit HaYehudi Chairman Naftali Bennett (R) with Moshe Ya'alon (Photo: Alex Kolomoisky)
The HaBayit HaYehudi Party issued a statement in response to Ya’alon’s departure. “Bogey Ya’alon is an ethical man who has come to a conscientious decision that reestablishes the dignity of Israeli politics at large. We thank him for all that he has given Israel in every position he has filled and are certain that he will not disappear from political life.”

Ayelet Shaked (Photo: Motti Kimchi)
Minister of Justice Ayelet Shaked (Jewish Home) lamented not having his input on future government decisions. “Minister Ya’alon is an ethical man who has contributed a great deal to Israel. His place is at the government table. I regret his departure from politics.”

David Bitan (Photo: Knesset Spokesperson)
Separating himself from most of the responses to Ya’alon’s resignation, Coalition Chairperson MK David Bitan (Likud) had some words of criticism for him. “Ya’alon’s resignation is a rash move. He was slated to be the minister of foreign affairs and could have used his many abilities in that position to benefit Israel.” He added, “Creating a broad coalition is a national interest for which everyone needs to rise above their personal interests. I truly hope that Ya’alon recants returns to work on Monday.”

Amir Peretz (Photo: Motti Kimchi)
MK Amir Peretz (Zionist Union, former minister of defense) focused his criticism on Netanyahu, saying tht “Bibi has finally managed to take out the minister of defense, after repeatedly waiting for an opportunity to do so.” He added, “Netanyahu has proven today that he isn’t the leader of the Israeli People, but only of its most extremist sector.”

US Secretary of State John Kerry (Photo: AP)
Reuters reported that following Ya’alon’s departure, the US government issued a statement on Friday, saying that it “looks forward” to working with the next Israeli minister of defense. “We appreciate Mr. Ya’alon's leadership and partnership as defense minister and we look forward to working with his successor,” said State Department spokesman John Kirby. “Our bonds of friendship are unbreakable, and commitment to the security of Israel remains absolute.”