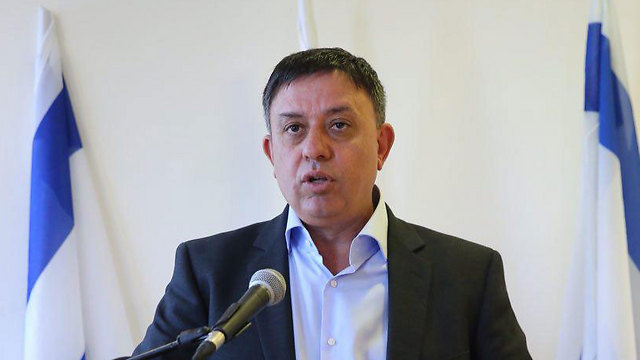 Kulanu minister resigns because of Lieberman

Environmental Protection Minister Avi Gabay annonced on Friday that he is to resign following Yisrael Beytenu's joining the coalition.

Minister of Environmental Protection Avi Gabay (Kulanu) announced on Friday that he was resigning from the government in protest to Avigdor Lieberman's joining it. He reportedly admitted that the appointment of the Yisrael Beytenu chairman as minister of defense was "a step that he couldn't live with." He held a press conference on Friday morning.

"After much deliberation the chairman of Kulanu movement and the minister of finance, Moshe Kahlon, that I have decided to resign from my position as minister of environmental protection," Gabay announced. "Despite the great importance that I see in the ministry and the significant actions that we are promoting to reduce air pollution and in many other areas, the recent political maneuvers and replacement of the minister of defense are, in my eyes, a grave act that ignores what is important to the security of the sate and will cause further radicalizing rifts in the nation.

"This is a policy that I cannot be partner to, and it is too essential a matter for me to continue as a member of the government."

"I would like to thank the chairman of Kulanu for his support, his faith and his help, and I have no doubt that the Kulanu movement will continue to leave its mark on important goals that we set on establishing (the party)," he summarized.

Speaking at a press conference on Friday morning, Kahlon stated, "I couldn't come to terms with Ya'alon's ouster."

Addressing his resignation, he said, "This week, a year after I entered the position, came something that I just couldn't stomach: Lieberman's appointment to minister of defense, which is in my opinion irregular even in the cynical world of politics. The minister of defense is the most important minister."

"I urge the prime minister to pull himself together and remember that the security is security, and he is relying on people and leadership, not only on tanks and planes."

Gabay ended by saying, "I'm sorry, but I promised myself and my family that I would never be a cynical politician, but rather a leader and public servant. In light of my comprehension of the recent political maneuvering, continuing with the current government would not be in keeping with my promise."

Moshe Ya'alon, who resigned as minister of defense, said on Gabay's resignation, "In our political system, insisting on principles became subject to ridicule, while zigzagging and deceit are considered 'sophisticated.' A full assessment of Avi Gabay proves that another way is possible. We must not give up."

Kahlon wrote on his Facebook timeline, "Yesterday, the Minister of Environmental Protection Avi Gabay informed me of his intention to resign from the government. I updated the prime minister on the subject and informed him that I intended to continue holding the environmental protection portfolio. Over the past year, we laid important and material groundwork at the Ministry of Environmental Protection for the quality of life for all citizens of Israel. The national plan for reducing pollutants in the Haifa Bay will continue alongside other important initiatives that the ministry led under Gabay."

The outgoing minister was prominent in his opposition to the gas deal. "The state must listen and understand the companies' claims and demands and then utilize its authority and sovereignty on this matter in order to arrive at the plan that is best for the citizens of Israel," he said at the time.

At the press conference, Gabay stated, "In my eyes, there is a clear line that connects the gas deal to the attack on the chief of staff and the IDF."

Recently, Gabay expressed his support for IDF Deputy Chief of Staff Maj. Gen. Yair Golan, who received criticism for drawing comparisons between current Israeli sentiment and that of Europe in the 1930s, which led to the Holocaust. Said Gabay, "Maj. Gen. Golan has sufficient rights and viewpoints so that we should listen to his words without attacking him. The fervor around Golan is misguided. We need to encourage senior officials to speak their truth and not vice versa."

Gabay added, "I don't believe that he was talking about the Second World War and the Holocaust. There's nothing similar to what is happening here to the Holocaust, but there are definitely here violent fervors and signs of racism that are similar at times to the fervor in Germany of the 20s and 30s.

Gabay , 49, was previously the CEO of Bezeq for six years, where he managed to increase its profits during a particularly competitive time in the telephone market. He did so while maintaining good relations with the employees and regulators.

After leaving that position, he worked in the public sector. In one position, he headed the committee to examine the crisis in Hadassah Hospital. Gabay was the first to publicly join Kahlon in establishing Kulanu and was the chief of staff before the election, though he did not himself figure on the list of candidates. He was appointed minister by Kahlon's insistence.