Scene of the attack at Max Brenner.
Photo: AFP 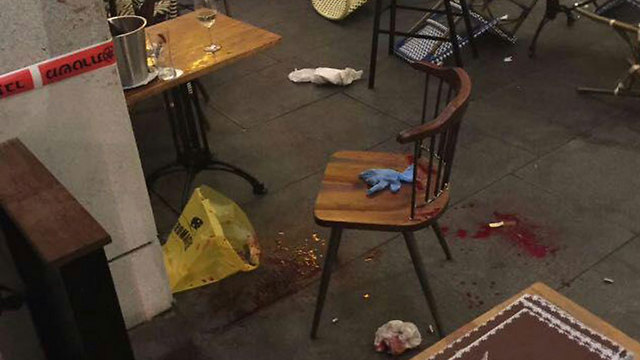 A terror attack next door to the IDF headquarters

Op-ed: Several serious questions arise from the terror attack in Sarona. How were the terrorists able to make it all the way from Hebron to the heart of Tel Aviv? Who aided them? And did the PA know of the impending danger but fail to warn Israel?

The massacre at Sarona Market was not the first time Palestinians from the territories had commited a terror attack using firearms or explosives. Even in the current wave of violence, there have been attacks committed by Palestinians who were barred by the Shin Bet from entering Israel and nevertheless managed to get all the way to the Tel Aviv metropolitan area.

But Wednesday night's deadly shooting bears the markings of something more "professionally" planned. This despite the fact that all signs point to the two not having been members of any terror organization and not committing the attack on behalf of any terror group, but rather of their own volition—much like most attacks in this round of hostilities.

Just like in several other instances in the current wave of terror attacks, the two terrorists are related to one another and came from the Hebron area. The big question is how did they get their hands on the firearms, and how did they manage to make their way from the Hebron area into the heart of Israel with these firearms without being stopped.

Scene of the attack at Max Brenner.
All signs indicate to the two acting alone. And yet, someone had to have driven them while not asking what they were carrying in their bags—which included not just firearms, but also knives—and drop them off at the center of Tel Aviv. The attackers carefully picked their target. Usually, terrorists are familiar with the place they choose to attack. It might be the case in this instance as well, and it's possible that they gathered intelligence before committing the shooting at the Max Brenner restaurant. In addition, there's the possibility that they intentionally chose the crowded Sarona complex, which is right across the street from the IDF and Defense Ministry headquarters. The attack was committed on the evening of the second day of the Ramadan fast, and there's almost no doubt it was inspired by the religious incitement that prevails in the Muslim world, mostly among those belonging to radical sects. In recent days, we've witnessed terror attacks in Istanbul and other places in the Middle East that were undoubtedly inspired by the holy month of Ramadan. We experience similar attacks every year during the month-long fast. Such was the case this time, with Palestinian media already dubbing it "The Ramadan Attack" and rushing to glorify the terrorists. Security footage shows that the terrorists used Carl Gustaf rifles, which may have even been improvised weapons. The video clearly shows one of the terrorists' rifles jamming, leading him to throw it on the ground in frustration as his friend continues shooting—before his weapon also jams. They don't appear to be very skilled, but they appear to be keeping their cool. The two sat down to eat, perhaps to end the day's fasting, and only then carried out the attack. They must have prepared for the possibility of their weapon jamming and that's why they brought along the knives.

In such a situation, the security apparatus must find the weak point that allows Palestinians from the West Bank to enter Israel illegally and reach the heart of Tel Aviv unhindered, where they could carry out their plans. This will now be the main issue investigated.

Unfortunately, according to IDF assessments, it is too early to declare the recent decline in terror attacks as indicative of the wave's end. The IDF views this situation as an unstable cession of hostilities that could be still reignited, with Ramadan being a prime time for violence.

According to unconfirmed reports, the Palestinian security forces received intelligence that the two cousins disappeared from their homes several days ago, raising the suspicion they might carry out an attack. The question is whether this report was also passed on to the Israeli security forces, and if it didn't—Abbas should answer for it. In any case, the level of alert must remain very high during the days of Ramadan, as what happened on Wednesday night could happen again. Meanwhile, the security guards at the Sarona Market and the police should be commended for quickly apprehending the attackers and restoring normalcy to Tel Aviv.