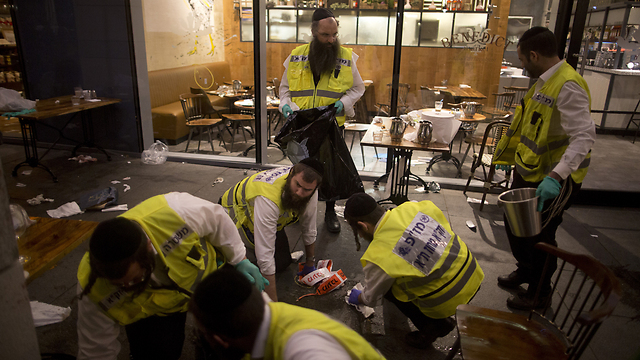 The media’s response in the Arab world to the terror attack at the Sarona Market was one more indicator of the conflict between Saudi Arabia and Iran. Several journalists who condemned the attacks suffered negative consequences.

Governments across the globe neglected to officially condemn the deadly terror attack in Tel Aviv’s Sarona Market, but that doesn’t mean there weren’t voices in the Arab world who spoke out against the shooting. Sadly, these voices have met with negative, even hostile, responses.

Egyptian journalist Bothaina Kamel, was among those brave enough to come out in public against the attack.

“What kind of heroism is it when you go into a restaurant and murder the diners inside?” she asked on twitter. While some expressed their support, many others turned their attention to Israel’s actions against the Palestinians. Kamal agreed that Israel’s actions were bad, but later wrote, “responding to a crime with a crime doesn’t cancel out your crime.”

The scene of the attack at Tel Aviv's Sarona Market. (Photo: Getty Images)

Responding to some of the harsh replies she received, Kamal clarified that she saw actions aimed against settlers, or “the occupying army” as another matter. One user responded by telling Kamal, “All of the Jews in the land of Palestine are occupiers and settlers. (Even) if you give up Tel Aviv, the Palestinians will stick to it.”

Egyptian Journalist Wael Kandil of the al-Araby al-Jadeed newspaper, which is known for its anti-Sisi coverage, responded to Kamal’s words, writing, “Bothaina condemns the attack in Tel Aviv, shares in Avichay Adraee’s (the IDF’s Arab-language spokesperson) grief, and wishes her Arab neighbors a satisfying fast and enjoyable fast-breaking meal.”

Meanwhile, Saudi journalist and analyst Dahham Bin Tarif al-Enazi went even further. Enazi, who previously raised the idea of opening a Saudi embassy in Israel, wrote “the action in Tel Aviv is terrorism and barbarity. Our empathy with the Palestinians doesn’t mean that we agree to murder civilians and innocents. Our condolences go out to the victims’ families.”

Bothaina Kamel. One of the few willing to condemn the attacks.
Enazi’s statement naturally led to harsh replies on Twitter, especially from Palestinians. “(Spit) on you and your honor, you dog,” wrote one replier. Another wrote, “The occupation is the real terrorism.” The Iranian press was quick to take advantage of al-Enazi’s statement. The Arabic-language Iranian news station Al-Alam framed it as an exampl of Saudi cooperation with Israel against Iran, and against the “Resistance axis,” which includes the Assad regime in Syria and Lebanese-based Shiite terror organization Hezbollah. An expanded story on the Al-Alam website said that al-Enazi is a member of the Saudi press association, and, “it seems that this Saudi media man hasn’t noticed the continuous Israeli crimes in the Palestinian territories, and the daily killings there.”

A tweet by Dahham Al Enazi. Caused a stir of its own.

The Iranian news channel later mentioned that meetings were being held between Saudi and Israeli officials, in an attempt at normalizing relations.

Saudi TV network Al Arabiya took a lot of criticism after it called the people murdered in the attack “victims.” One of the repliers wrote sarcastically that the network’s people should have “prayed for the souls of those killed in Tel Aviv.” Another wrote, “How loathsome they are… they don’t even have a minimum amount of Arab-ness (in them).”