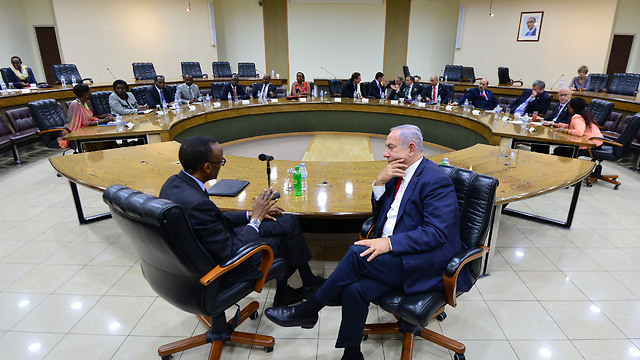 Netanyahu's trip is worth every penny

Op-ed: Symbols are what tie a nation together, a projection of power and strength. Therefore, despite the high price tag of Netanyahu's trip to Africa, it is all worth it to help Israel come back to the strong nation-state it used to be.

Yoni Netanyahu was a childhood hero of mine. I read his book "Letters from Yoni" until the pages began to fray. I saw the movie "Yoni's Operation" dozens of times, and I get emotional every time I hear the song "Eretz Tzvi."

If one were to count the number of schools, town squares, and streets named after Yoni Netanyahu, it becomes clear that he was the hero of an entire generation. He was the head of a military operation that symbolized everything we wanted to see in ourselves, and only three years after the trauma of the Yom Kippur war. Yoni Netanyahu and the operation he was killed in are reminders that Israel is a daring and brave warrior, a warrior who doesn't leave a man behind, no matter where they are. Israel, where the army is a symbol of royalty and where the people in the political establishment make military decisions which could cost them their jobs.

There are post-modernists who view these symbols as the root of all evil. Most of these people can't understand how violence can still exist, how the UK can vote against being in the EU, or how globalization is failing. They find it difficult to understand how patriotism and Judaism and Israelism can continue so many years after the Zionist movement succeeded in establishing a state.

For me, these symbols are an existential necessity. Human beings are motivated by symbols and spirit. They go and fight because they feel that they are connected. They vote in elections with blind trust, without knowing the results, or sometimes, the approximate results of their actions. They're willing to pay in blood and with their property because of feelings which have no quantifiable or visible value.

This is the exact reason why I refuse to get angry at how much Netanyahu's visit to Africa is costing. Contrary to popular image, the business of the spirit actually does cost money, and sometimes it costs a lot.

In the beginning of the state's history, there were giant military parades held throughout Israel on Independence Day. These used to cost a lot of money. Yet despite the IDF's tiny budget at the time, Prime Minister Ben-Gurion made them a priority. Sadly, they've disappeared because of their high price tags and the lack of understanding of national spirit and national symbols. The Israeli presidency and all of its ceremonies cost the tax payer quite a bit as well, yet no one is calling for the position to be removed. One can say the same thing about humanities faculties in universities, the Bible Contest (a contest of biblical knowledge held in Jerusalem every Independence Day), the Police Orchestra and others.

Thus, we have the symbolic visit of the Israeli prime minister to Uganda and other African countries. He needs security, planes, food and staff members. He works, so I have no problem with him putting a bed in the plane, even if it's something he can seemingly do without. The rest are small expenses that aren't so important.

Netanyahu's visit to Entebbe is a symbolic visit in and of itself. Businessmen will operate in Africa with or without him there, and relations with African countries are dependent on interests that diplomats are in charge of creating and managing – with or without Netanyahu. However, the reminders of who we want to be and what we can be can only be done via official visits by the Prime Minister, via the ceremonies, and via the related expenses. We must ask the question "What is Israel in 2016," and more importantly, if it is still possible to re-enact Operation Entebbe.

There are three processes that help us answer this question. One is the process of us turning our soldiers into "children." While the motto of the Litani operation in the 1970s was "we will return our soldiers back home in peace," this motto has turned into a national strategy. The soldiers have become more important than the civilians they protect, and that's how the Israeli public relates to them.

The second is how we treat terror organizations – especially our readiness to pay them a very high price to them, and to not take risks with them. The third is the way that we make decisions, even at the risk of failure or loss of political power. We can see this with the two prime ministers who made the decisions to blow up nuclear reactors (in Iraq and Syria), and with Rabin during Operation Entebbe and the failed operation to save two soldiers in 1975.

Israel in 2016 has established commissions of inquiry into issues where nothing is there – such as the case of the takeover of the Mavi Marmara. Those who don't win know that there is a commission of inquiry waiting for them at the end.

Today's soldiers are better and more professional than they were 40 years ago. Regarding the rest, this visit highlights many questions. If all of these cameras and entourages help us get back to who we really are, then this trip will have been worth every penny.