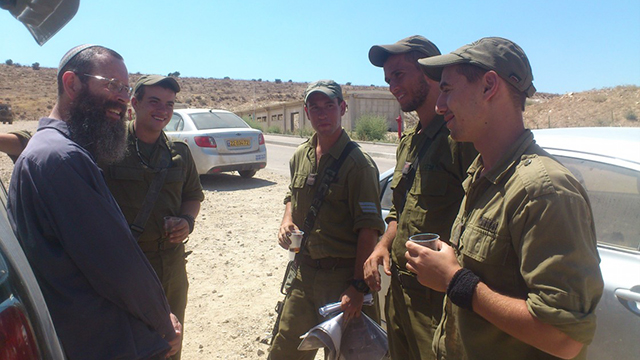 Op-ed: Rabbi Yigal Levinstein's now-infamous speech didn't just take aim at the gay community, but also at the IDF. It is time to address this inner strife.

Rabbi Yigal Levinstein's speech before the Eli Preparartory had many facets to it: not only did it harbor a hatred toward members of the gay community, the Reform community and anyone else he doesn't get along with, but it also held a great deal of criticism against the IDF's Education and Youth Corps and the very spirit of the Israeli Army. The speech was dramatic, since the Eli Preparatory is in itself a symbol of the integrated, Zionist religious sector. It is a factory for combat officers, and sadly, many fallen soldiers are also listed among its graduates. The national-religious attitudes that stem from that preparatory are one thing; but the criticism it lobbies against the IDF is another, and can no longer be ignored.

Lately, the IDF's relationship with Israeli society has been strained. And while it is true that top army officials have always been the target for politically-motivated attacks, most of them have come from the left, for example from Prof. Yeshayahu Leibowitz and his "Judeo-Nazis" comments or organizations such as "Breaking the Silence." The IDF withstood all of it, but over the past year it has become the right's punching bag, as well.

Rabbi Yigal Levinstein speaks with IDF soldiers (Photo: Eli Preparatory)
It happened at the hands of self-proclaimed patriots, with social media paving the way for their attacks. Elor Azaria support campaign is one example, the backlash from IDF Deputy Chief of Staff, Maj.-Gen. Yair Golan being another. And now Rabbi Levinstein. The IDF knows how to combat its Arab enemies, in some incidences better than others. But when it comes to Jews, its forces never return home safely. After Golan's Holocaust Remembrance Day speech, with its problematic comparison to Nazi Germany, many Israelis felt the IDF was stepping into educational matters that weren't its concern. What followed was a struggle between the IDF's Education and Youth Corps and the IDF Rabbinate, and finally by the claim that the Israeli Army is no longer the deciding factor in wars because it's lost its spirit. I served in the IDF for nearly six years without getting mixed up with either sector. As far as I was concerned, the Education and Youth Corps was responsible for Sunday's culture events and the Rabbinate for providing us with sufganiyot come Hanukkah. Without interesting me very much, the two managed to strike a balance, with the left criticizing the IDF's visits to the City of David and meeting with settlers, while the right, it appears, didn't really care for the Education Corps. In any case, the two sides left the fighting to the commanders. In 1948, Hebrew poet and Givati's Education Officer Abba Kovner motivated his soldiers through his words. It is doubtful that many of them, who had only just stepped off the boat that took them to Israel, understood what he was saying, but they got enough of it to have a lively debate about what he wrote. It is permissible and even encouraged to voice your criticism of the IDF, but this past year has seen the widening of an essential crack, promoted by politics. Accusations of a defeatist spirit within the IDF is mainly a political tactic meant to evade taking responsibility. The IDF isn't defeating Hamas because it hasn't been given orders to do so, and not because it is "too leftist." It isn't conquering Gaza becuase no such order was handed down. There is the executive level, and only then there is the operative level. Prime Minister Benjamin Netanyahu has promised to bring about Hamas' demise, and as head of the Opposition he has had numerous occasions to do so. It's easy for politicians to divert attention. Apparently, rabbis find it easy, too.